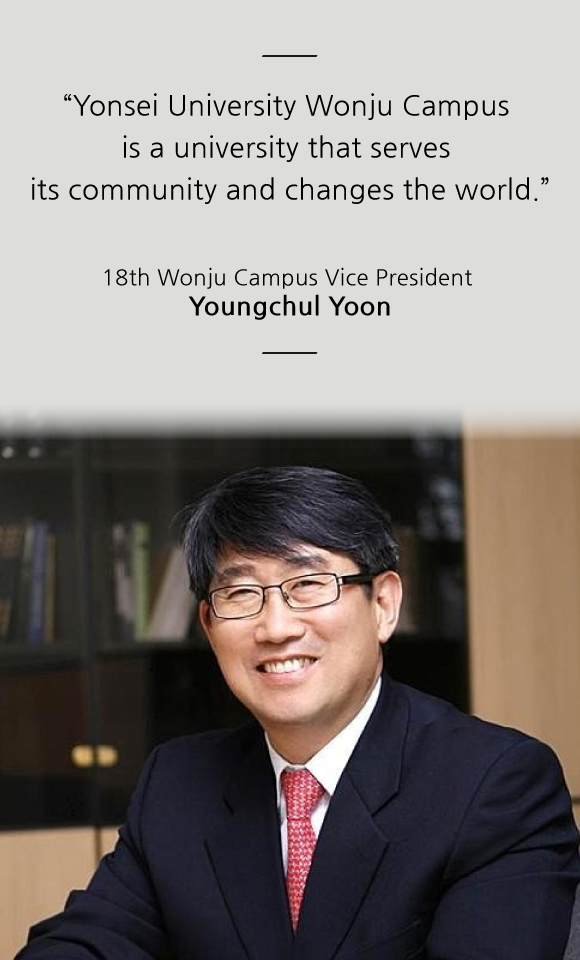 Yonsei University Wonju Campus was the first to encourage continuous innovation in education by successfully introducing the Residential College (RC) system, and Wonju Severance Christian Hospital has greatly contributed to the health promotion of the local community. The university has strengthened its research competitiveness in specialized fields, created a customized model for region-based university and industry cooperation, and played a leading role in the local and international volunteer work. It has also taken place as a “university that serves its community and changes the world” through the construction of a nature-friendly eco-campus with a healthy university culture.

The expansion of new technology that is leading the Fourth Industrial Revolution, such as artificial intelligence and big data, demands a change in the paradigm of university education and many schools are currently transforming their curriculum of standardized knowledge conveyance into a creative problem-solving model.

Our university is also investing continuous effort in educational innovation that will help overcome the expected crisis by actively responding to this historical change and adopting new education techniques and curriculums.

The eagle of Wonju Campus has flown high and ceaselessly led the growth of the university for the past 40 years. Now is the time to catch its breath and soar again towards the right coordinates of innovation after a molting period to prepare for stronger flight. Rearmed with sturdy wings formed through innovation, the Yonsei eagle will now boldly break through any crisis or obstacle and fly even higher. I hope you will support us through your active participation and deep interest.