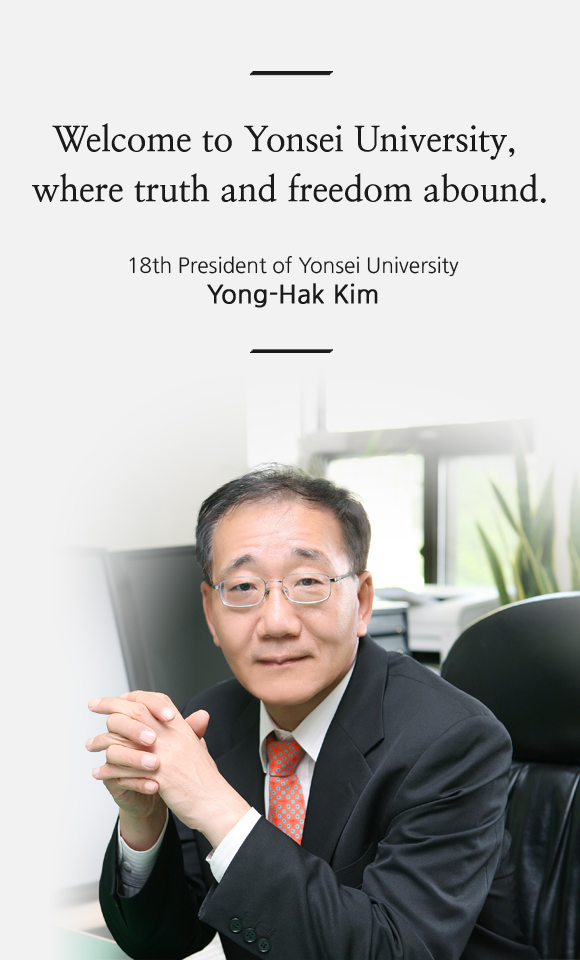 Yonsei University opened the door to modern higher education over one century ago. It has since then emerged as the nation’s top private university and ranks among the world’s most prestigious universities. Building on our history and tradition, Yonsei will actively pursue a new future. Seeking to find our place in the spectrum of civilizational transition, Yonsei will lead the next 100 years and write a new history.

We are now entering a world of unimagined possibilities. In a whirlwind of massive transformations, the rapid development of communication and scientific technologies in particular are reshaping the university teaching and research environment entirely. The demand is rising for a new education model that supports a generation expected to live to be 100 years old. Thus, Yonsei University is reforming its research, education system, and supporting administration in order to lead the way in forward-thinking research and education for a changing society.

Merely providing highly specialized knowledge, as was the practice in an industrial society of the past, would now be a disservice to students who will live to see the turning of a new century. Even in an age where artificial intelligence surpasses human cognitive ability, Yonsei will answer the call to foster the creative skills that can only be carried out by human beings. Yonsei is developing diverse programs to foster creativity in a “network society.” In the modern era, constant interactions of different areas of knowledge and expertise build networks that give way to entirely new forms of knowledge and perspective.

For example, physicists advancing the theory and technical skills of nanotechnology are breaking barriers between pure science and applied technology. Collaboration between the humanities and natural sciences has brought about innovations that were previously unimaginable. It is therefore important that departments bridge the divides and encourage dialogue between researchers of other fields. To this end, I believe in the importance of facilitating “extelligence,” the improvement of intelligence through the coupling of otherwise estranged bright ideas. Creativity is not merely the ability to make the intangible tangible, but rather is the ability to take what already is and make something new through cognitive networking.

In the future, empathy and sharing will be just as important as creative thought. Yonsei will drive the effort to address such an “empathetic society” by raising leaders who practice sharing. For in this society of the future, the pursuit of personal gains will be replaced by mutual respect and the sharing of joys and sorrows with others; society will shift away from its “survival of the fittest” mentality and look toward self-expression, and individualism will turn to collectivism. The founders of Yonsei planted the value of going beyond simply sharing material resources and capabilities by sharing leadership. Challenge and creation, communication and empathy, sharing and consideration, servitude and respect. These are the values that we carry with us as leaders of the future, and will practice and uphold as Yonseians. Join together with Yonsei in leading the way to the future.