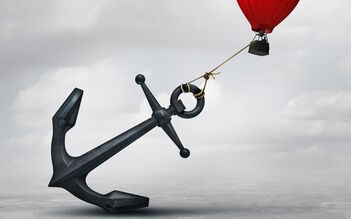 In a low-inflation environment, inflation expectations are well anchored with little uncertainty. However, rising inflation has led to a rise in inflation uncertainty as well, hindering economic growth. Now, researchers shed light on the link between inflation anchoring and growth.

But, what is it about inflation anchoring that facilitates economic growth? So far, there has been limited evidence on this front. To exert better control on inflation and, in turn, on economic prosperity, understanding this link is imperative.

In a study published in the Journal of Economic Dynamics and Control, Prof. Sangyup Choi and Myungkyu Shim from Yonsei University, South Korea, along with Dr. Davide Furceri and Dr. Prakash Loungani at the International Monetary Fund, have now demonstrated, based on theoretical predictions and empirical evidence, that credit constraints have an important role to play in affecting economic growth when interacting with uncertainty in inflation expectations. The research has implications not only for academia but also for policymaking in a time of rising inflation.

“The rapidly rising inflation of our time was a wake-up call for us to pay renewed attention to the importance of inflation anchoring,” says Prof. Choi, speaking about the motivation behind their study.

In their work, the researchers constructed a model in which banks finance the investment of firms by lending them nominal contracts and the central bank attempts to anchor the inflation expectations. The model predicted that a rise in inflation uncertainty will particularly affect industries that are credit constrained since bank loans are not indexed to inflation. In other words, industries that are more dependent on external financing are likely to suffer more under high inflation uncertainty. The researchers then tested these predictions against growth data for 22 industries across 39 countries.

“According to our model, the positive effects of inflation anchoring are seen most strongly in industries with credit constraints, a prediction that was confirmed by empirical data,” comments Prof. Shim. Additionally, the researchers found suggestive evidence that, on average, countries with better inflation anchoring see a faster economic growth.

Since the findings of the study are consistent across different types of economies, it is essential to keep a tight hold on inflation anchoring. To accomplish this, central bankers should adopt improved monetary frameworks that help anchor inflation expectations through, for instance, publishing inflation targets. This could lower uncertainty and, in turn, help credit-constrained industries and the economy flourish.