Hydrogen peroxide (H2O2), a widely used chemical reagent, has various applications in industrial and environmental processes. But, its production on the industrial scale requires toxic organic solvents and a high energy input, making the process energetically infeasible. Considering the high demand for H2O2 in chemistry, developing green and sustainable methods for its generation is crucial. A photoelectrochemical (PEC) method that uses sunlight, water, and oxygen has been considered as an alternative to the conventional method. But, current PEC strategies for H2O2 production are inefficient, thereby making their practical application difficult. To this end, in a study published in Energy & Environmental Science, a team of scientists from Korea, led by Prof Hyoung-il Kim of Yonsei University, aimed to develop a novel PEC system for the efficient generation of H2O2. This study was a result of research done under the open/shared campus-based collaboration started in 2018 between Yonsei University and POSTECH, a national representative of science and technology in Korea. 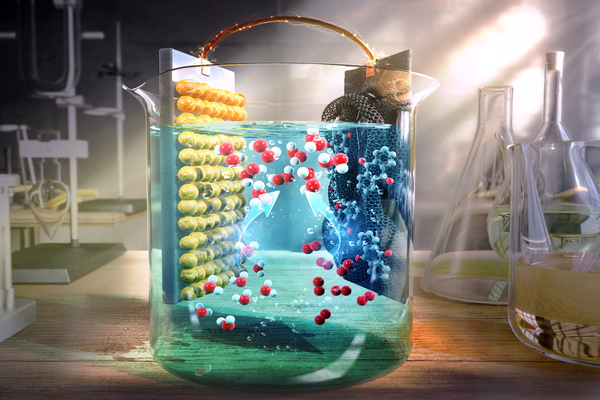 A typical PEC cell consists of a positively charged electrode called the “anode” and a negatively charged electrode called the “cathode.” Conventionally, the production of H2O2 takes place through only one of the two electrodes, that is, the cathode. In this study, the scientists aimed to come up with a “dual electrode” system, in which both electrodes could be used for the generation of H2O2 and thus result in an overall improved efficiency. Prof Kim explains, “We wanted to develop a highly durable and selective PEC system that utilizes solar photons more efficiently in the production of H2O2 than current systems.”

To begin with, the scientists used a modified anode composed of bismuth vanadium oxide (BiVO4). They found that doping the anode with a metal such as molybdenum and treating it with phosphate facilitates the splitting of water to produce H2O2, with a significant improvement in its durability. Then, they moved on to modify the existing cathode, which was made up of carbon nanotubes, with a compound called anthraquinone (AQ). They found that the addition of AQ catalyzes the reduction of oxygen to H2O2, in a highly selective manner. In this way, the scientists were successful in generating H2O2 with an excellent current utilization efficiency and durability. Prof Kim says, “Although dual electrode processes employing a BiVO4 photoanode for H2O2 production have been reported before, we developed a highly durable and efficient photoanode and a highly selective cathode, combined to construct a practical and robust PEC system for sustained H2O2 production.”

H2O2 is a popular reagent and is in high demand owing to its applications as an oxidant, bleaching agent, and antiseptic agent. In this study, scientists successfully developed a novel “dual PEC approach,” which is an ideal, environment-friendly strategy for the clean production of H2O2. Moreover, this study paves the way for further developments in ecofriendly solar-based PEC systems, taking us a step closer to a sustainable future.