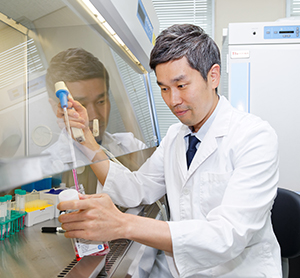 The Hippo pathway has gained tremendous interest over the last decade because of its ability to control organ size and tissue homeostasis, and deregulation of this pathway leads to cancer. Inactivation of core Hippo pathway kinases leads to the activation of the major functional transducer YAP and its paralog TAZ. YAP/TAZ is an oncogenic transcription co-activator that regulates gene expression primarily via interaction with the TEAD family of transcription factors.

Data reveal a novel mechanism underlying nucleocytoplasmic shuttling of TEAD and show that localization of TEAD is a critical determinant of the Hippo signalling output. Professor Park’s group is currently focusing on screening chemical compounds to identify TEAD inhibitors for developing an effective anticancer.