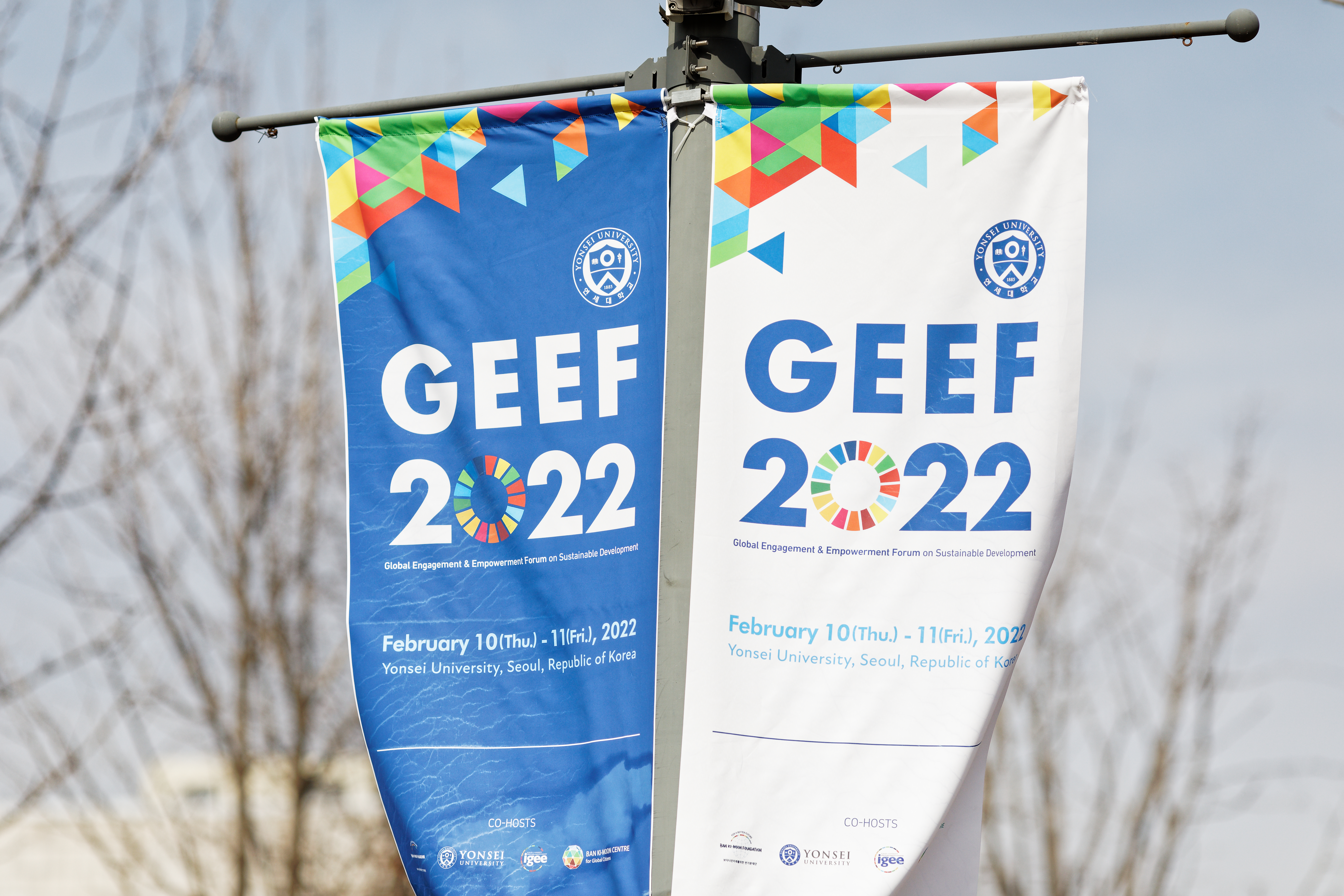 "REMEMBER Our Common Future": Over 100 global experts present directions for the future of UN SDGs 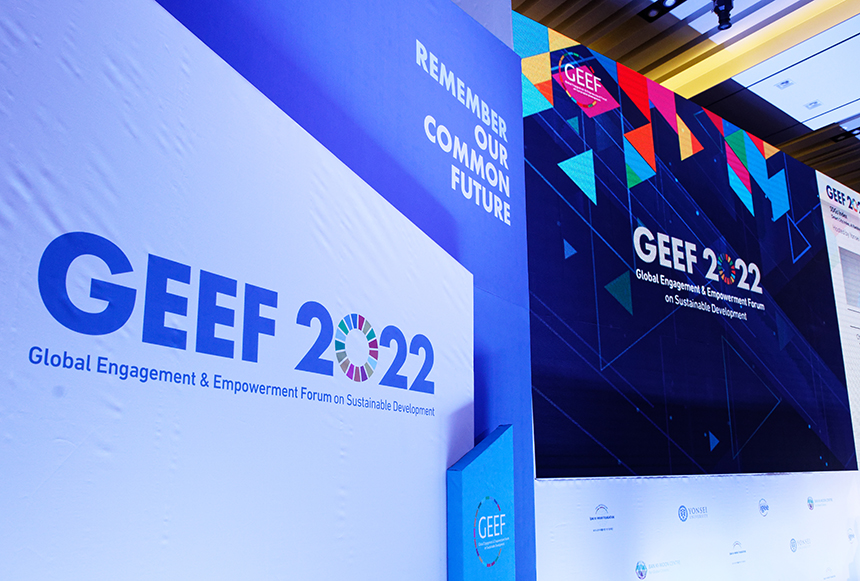 The 4th Global Engagement and Empowerment Forum on Sustainable Development (GEEF 2022), hosted by Yonsei University in Seoul, Korea, during February 10-11, ended successfully with 1,200 registrations around the world and accumulated more than 10,000 views on YouTube.

The event, co-hosted by the Institute for Global Engagement & Empowerment at Yonsei University (IGEE), Ban Ki-moon Foundation for a Better Future, and Ban Ki-moon Centre for Global Citizens, revisited the meaning and achievements of the United Nation's Sustainable Development Goals (SDGs) under the theme of “REMEMBER Our Common Future.” The forum also discussed the direction of changes in the international cooperation system for the post COVID-19 era. Around 100 experts from various fields around the world participated in one Special Session, three Plenary Sessions, and 12 Featured & Scientific Sessions that covered a wider array of topics compared to previous forums. The Forum provided simultaneous English Korean interpretations and sign language interpretation for all sessions to allow for more inclusive participation in sharing wisdom for coexistence. 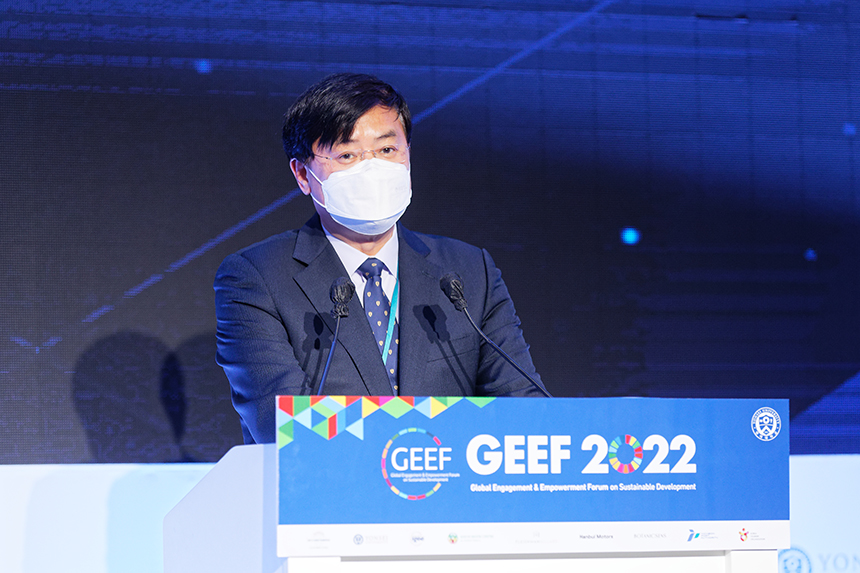 At the opening ceremony held on February 10, Seoung Hwan Suh, President of Yonsei University, said, “Since its establishment in 1885 and during its 137-year history, Yonsei University has continuously contributed to society, motivated by its core values of mutual solidarity, commitment, and engagement,” adding, “As a leading university and SDG champion in Korea, we will continue to promote awareness and efforts to contribute to a sustainable future.”

Honorary Chair of the IGEE at Yonsei University and the 8th UN Secretary-General Ban Ki-moon stated, “Today’s Forum deals with many interesting topics including sustainable development goals, women’s health, COVID-19 vaccine accessibility, global citizenship for a sustainable tomorrow.” He added, “I am certain that this forum will bring about concrete suggestions and ideas for the better future of humanity.”

Heinz Fischer, the 11th President of Austria, then stressed that “conferences like GEEF, the exchange of opinions that lead to action, the sincere will to improve our society and the commitment to human rights are important elements for a better future.” Choi Jong-moon, the 2nd Vice Minister of Foreign Affairs, Republic of Korea, stated in his congratulatory remarks, “I would like to highlight the critical importance of forging multi-stakeholder partnerships to achieve sustainable development,” adding, “to this end, I look forward to the Forum’s continued leadership in engaging diverse stakeholders in our common quest towards the 2030 agenda.”

During the keynote speech, the Deputy Secretary-General of the UN, Amina J. Mohammed, emphasized that “there is no denying that the pandemic has made out task even harder... Now is not the time to simply list or lament challenges. Now is the time to act.” She added, “the actions we take today will determine where we stand on the SDGs in 2030. This will shape conditions for decades and generations to come. Strengthened cohesion and forward-looking action can prevent and respond to future crises, climate-related disasters, famine, conflict, and public health emergencies.” 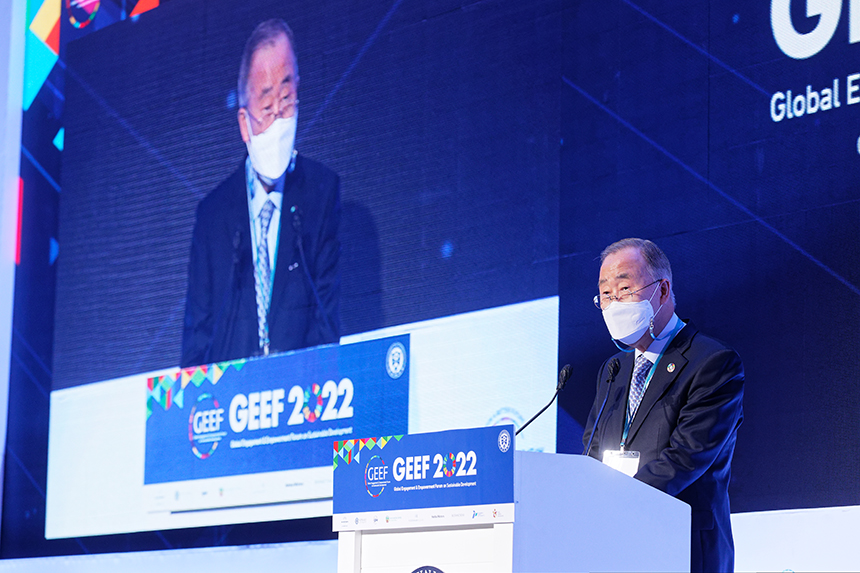 In the Special Session held on the morning of February 10, speakers under the theme of “REMEMBER Our Common Future” examined the past, present, and future of SDGs. The Special Session started with Gro Harlem Brundtland, the former Prime Minister of Norway, also known as the "mother of SDGs," and Ban Ki-moon, Honorary Chair of the IGEE, reaffirming the importance of international cooperation and education written in the 1987 "Our Common Future" Report at a time when global cooperation for sustainable development is retreating due to COVID-19. The two concluded their conversation by anticipating a better future created by the younger generation.

Then, Jyotsna Puri, the Associate Vice-President of the Strategy and Knowledge Department at the International Fund for Agricultural Development (IFAD) under the United Nations, emphasized the worldwide increase of socially marginalized people due to deterioration in various areas such as poverty, hunger, inequality, and climate. She then introduced IFAD’s efforts to achieve SDGs.

JH Kah, Executive Vice President and Chief Innovation Officer of YG Entertainment, introduced K-Pop’s role in communicating with the younger generation through cultural and artistic influence. He also talked about social participation activities based on the positive influence of YG artists such as BLACKPINK (UN SDG Advocates), AKMU, and YOON.

Finally, former Minister of Foreign Affairs of the Republic of Korea, Kang Kyung-wha, discussed various issues and the future state of the world through topics such as climate change, clean water, quality of education, and sustainable development with eight youth representatives from six different countries around the world. Former Minister Kang expressed that it is encouraging to see that young people have ideas, and a firm will to achieve SDGs and that the voices of the youth must be reflected as they head towards the milestone year of 2030. 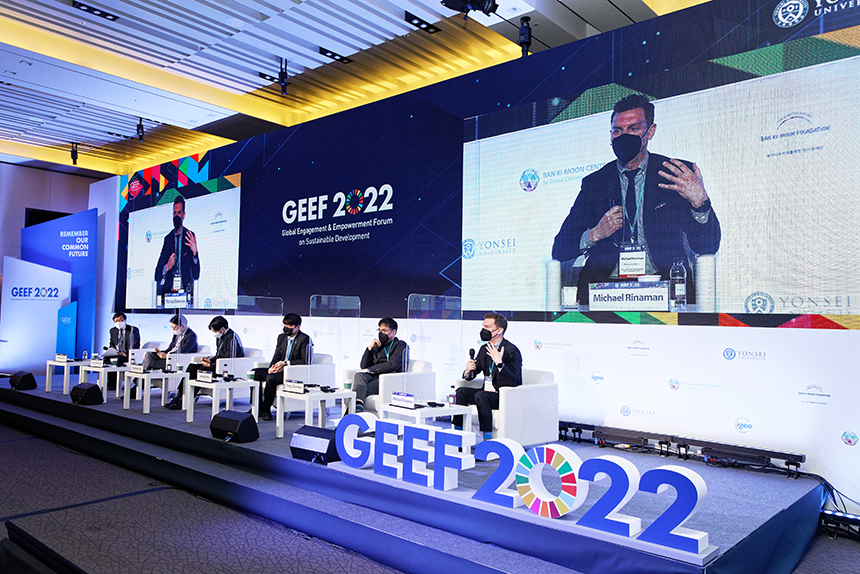 A total of 15 Plenary Sessions and Featured & Scientific Sessions included participation from Director General of International Vaccine Institute (IVI), Jerome Kim, Executive Director of the International Monetary Fund (IMF), Mahmoud Mohieldin, Minister of Education and Religious Affairs of Greece, Nikki Kerameus, and many other distinguished speakers. They shared ideas for achieving UN SDGs in various areas, including vaccine accessibility, social care, SDGs index, and global citizenship. The participants particularly agreed on the importance of rebuilding the international cooperation system, which was disrupted by the pandemic, and urged for rapid change.

Finally, Park Young-Ryeol, Chair of the Institute of Global Engagement and Empowerment (IGEE) at Yonsei University, stated, “IGEE at Yonsei University will continue to progress in teaching and researching about sustainable development to build a better world, and create a new path as a university that leads the era of the new-normal,” and promised GEEF’s return in 2023.

The Forum was officially sponsored by FleishmanHillard Korea, Hanbul Motors, Botanicsens, Incheon Port Authority, and Korea Tourism Organization. It was held as part of the Fourth Phase of the BK21 graduate school innovation project. The entire Forum is recorded and available on Yonsei University IGEE’s Official YouTube channel. Photos and materials of the event will be available at GEEF’s official website (www.geef-sd.org).

About the Institute for Global Engagement & Empowerment at Yonsei University

The Institute for Global Engagement & Empowerment (IGEE) (Leadership: Honorary Chair, Ban Ki-moon; Chairman Young-Ryeol Park) was launched in 2017 with the goal of producing "Creative leaders with community spirit" while upholding the university's main principles of Coexistence and Engagement, Creativity and Innovation, and Challenge and Excellence. Affiliated organizations include Ban Ki-moon Center for International Cooperation, Yonsei Institute for Global Health, and Center for Global Sustainability.