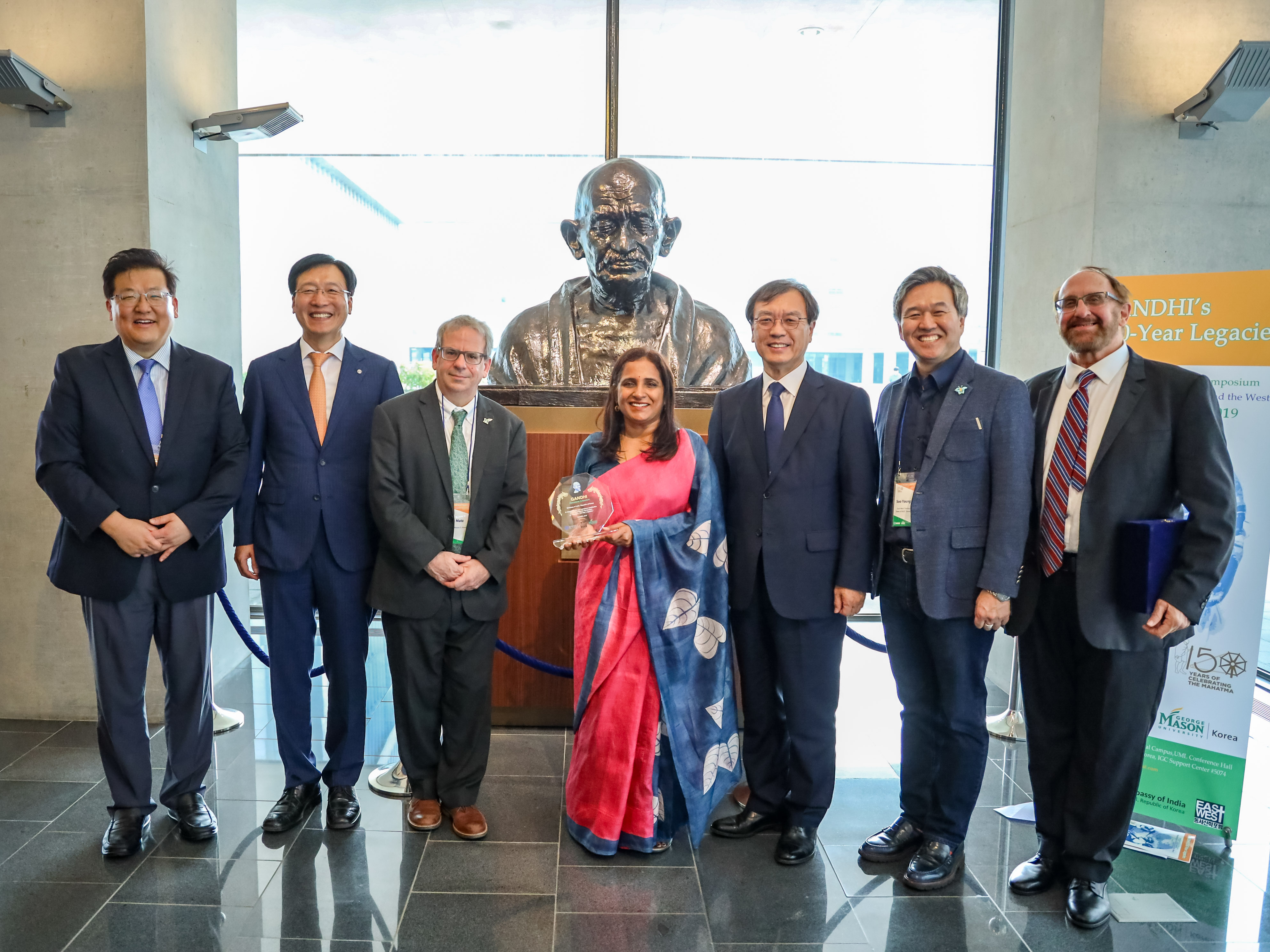 Joint international symposium on Gandhi’s 150-year Legacies: Peacebuilding from Asia and the West 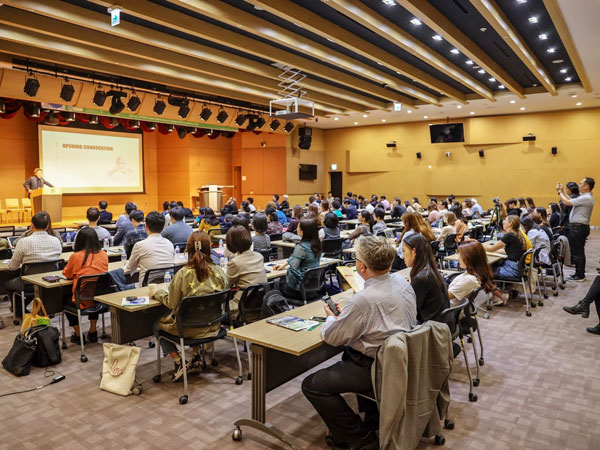 To commemorate the 150th anniversary of Mahatma Gandhi’s birth, Yonsei University hosted the joint international symposium on “Gandhi’s 150-year Legacies: Peacebuilding from Asia and the West” this early October.

Held during October 1-2, the two-day event was co-hosted by Yonsei University United Graduate School of Theology, George Mason University-Korea, and the Embassy of India in Korea as the 6th East-West Theological Forum, with the shared aim to build a bridge between Asia and the West to seek theological wisdom for issues in contemporary society.  The official opening and first day of the joint international symposium were held at Yonsei International Campus (YIC) located in Songdo, Incheon, with the following day’s events held at George Mason University-Korea.

Featuring keynote speeches, lecture sessions, student presentations, and a peace concert, the symposium commemorated Mahatma Gandhi’s legacies of peace for the world and his teachings of nonviolence, forgiveness, and independence. Participants and speakers from diverse backgrounds gathered to discuss the historical context of his teachings and explore how they can be applied to promote peace while resolving conflict today.

The first day’s events began with opening remarks of distinguished guests, including Kim Geo-sung, Senior Secretary to the President for Civic and Social Affairs, Sripriya Ranganathan, Indian Ambassador to South Korea, as well as senior administrators from Yonsei University and George Mason University-Korea. 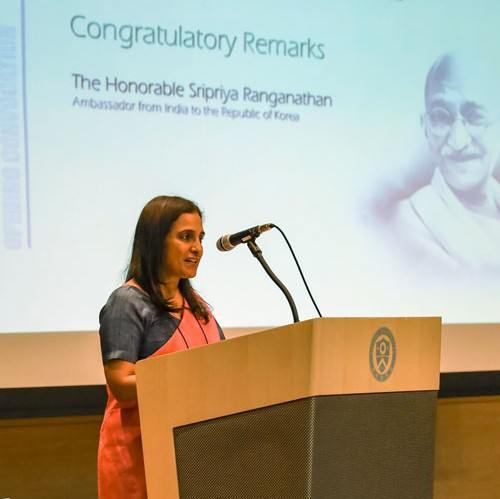 “Considering the current global community filled with serious conflict, alienation, and oppression, Yonsei University must include Peace Studies in its core curriculum,” said Professor Moon Il, Senior Vice President for Research Affairs at Yonsei University. “I hope hosting this Gandhi Peace Symposium can be a meaningful starting point for more peace and conflict-related studies in the future.” 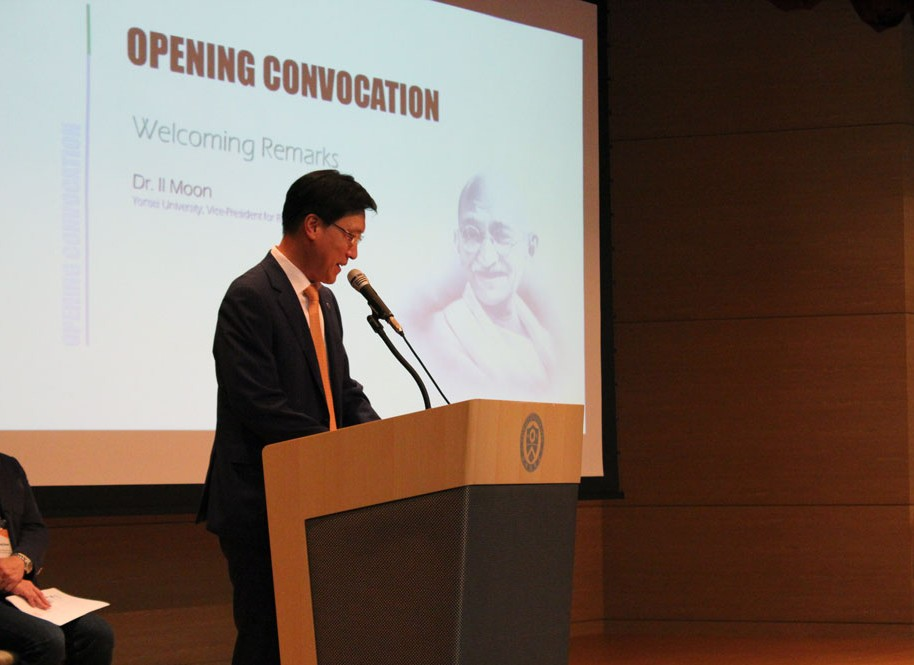 After the opening convocation, the dedication ceremony of Gandhi Statue was held at Veritas Hall B on campus, where the bust of Gandhi, donated by the Indian government to Yonsei University earlier this year, is located. 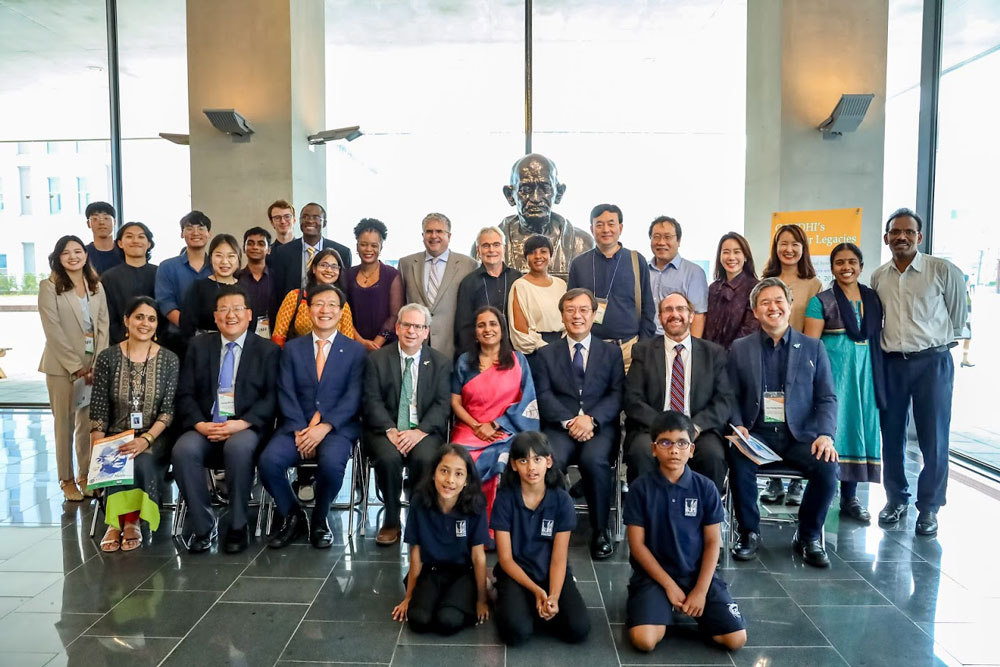 Following the ceremony, Lester R. Kurtz, Professor of Sociology at George Mason University-Korea, delivered the first keynote speech on how Gandhi’s global legacies of spreading the spirit of non-violence around the globe. In his talk, Professor Kurtz explores three motifs to analyze the conundrum of religion and violence: the warrior, the pacifist, and the nonviolent activist, or the “Satyagraha.” Spanning the Hebrew, Christian and Islamic scriptures, the history of the crusades, and the teachings of the Buddha to Gandhi and Martin Luther King Jr. he examined the role of religious beliefs, rituals, and institutions in diffusing Gandhian nonviolent civil resistance in the past century and how Gandhian nonviolence can resist injustice and bring about change with the support of people power, or a “truth force.” Professor Kurtz concludes by stating that Gandhi’s nonviolent civil resister fights like the warrior but avoids harming like the pacifist. 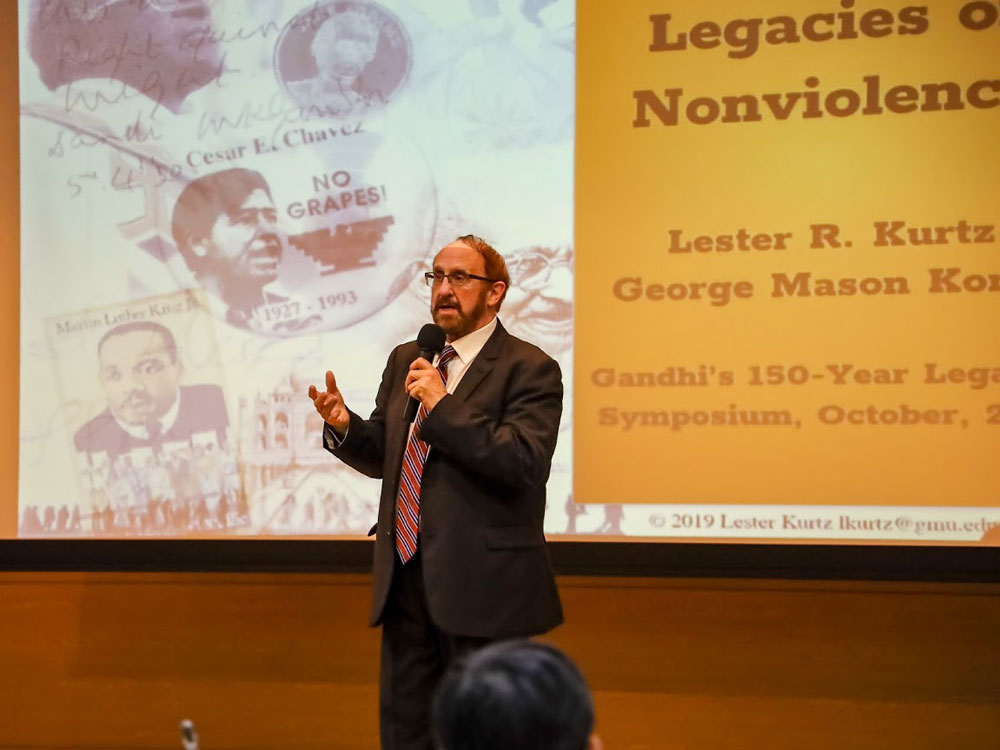 After a memorable concert by peace activist and singer Hong Soon Gwan, the symposium focused on the presence of Gandhi within the 21st century. In a special session, Yang Hee-chang, one of the founders of Gandhi School in Korea and former principal of Jecheon School of Korea, introduced the Gandhi School, which aims to teach adolescents the values of sharing, humility, and independence - core values that Gandhi treasured throughout his life. Succeeding Gandhi’s ideals, the school encourages student participation through discussion and presentation-based classes and provides a rigorous academic environment where students can learn about various social issues of utmost importance. Gandhi School of Korea also attempts to connect with students in other nations by offering cross-country interaction programs with foreign schools in India and the Philippines. Through its creative learning program, the institution emphasizes the significance of labor, independence, and self-reliance. In particular, Gandhi School’s participatory education teaches how students can play a role in the rapidly globalizing society full of violent conflicts across borders. Having established several Gandhi schools in South Korea, Yang is in the process of founding the Asia Peace College. It is expected to open in June 2020 and plans to teach practical skills such as farming, architecture, and cooking. It will also offer courses that aim to enrich students’ lives, such as humanities, art, and trade.

In this light, the latter part of the special session consisted of five presentations on the common theme of continuing Gandhi’s legacy in the 21st century from undergraduate and graduate students from the two host universities, facilitated by Paik Young Min, Professor at East-West Theological Forum and Yonsei University.

Graduate students from the Global Institute of Theology at Yonsei University created a video presentation under the title of “150 Years of Celebrating Mahatma.” In the video, students of various nationalities such as Taiwan, Pakistan, and Kenya shared their thoughts and concerns regarding Gandhi’s ideologies and how his teachings have influenced their respective countries.

Claire Sukin Jung, a freshman student at George Mason University, gave her presentation titled “Prayer for Peace.” Throughout her talk, she addressed what peace means in the 21st century and stressed that everyone in the global society should attempt to involve the marginalized population. By the end, she referenced Gandhi’s original “Prayer for Peace” as a guideline to sustain peace in our society.

Farah Annessha and Jessica Boji, two Yonsei University freshman students, connected Gandhi’s words with female empowerment in their “Kill Them with Kindness” presentation. They focused specifically on feminism in South Korea by analyzing the causes of widespread misandrist feminism. They proposed to Korean society to refer to Gandhi’s sayings when negotiating microaggressions on the issue of gender conflicts. They ended the presentation by reading out Gandhi’s saying: “An eye for an eye makes the whole world blind.”

Tabitha Kwon, an International Studies major at Yonsei University’s Underwood International College, gave her presentation on “Peace and Justice Today, in the Prism of Gandhi.” Her presentation covered the research she had conducted regarding the refugee agreement between Turkey and the European Union. She claimed that global society has gone through endless cycles of global tensions and conflicts and that it is now time for the nations to collaborate for peace. She suggested “global citizenship” as the solution to keep the world peaceful, as this new type of citizenship will not leave anyone behind nor ostracized.

Matthew Mandell of George Mason University wrapped up the student presentations with his talk on “Gandhi: The Man before the Legend.” Mandell spoke on who Gandhi was as a scholar, a soldier, and an ordinary citizen before he became an icon of peace. The speaker touched upon Gandhi’s motivations that drove Gandhi to pursue his ultimate goal of peace. Mandell concluded the session by reminding the audience that Gandhi was not “born” to be the symbol of peace, but that his drive and dream made his achievements possible.

The second day of the joint international symposium was held at George Mason University-Korea, beginning with a keynote speech and then three themed lecture sessions on Gandhi’s impact around the globe, continuing his legacies for peace in the contemporary world, and contemplating the direction of implementing his teachings into the future.

Liu Cheng, Director of the Institute for Peace Studies at Nanjing University (China) and Holder of UNESCO Chair on Peace Studies, gave the final keynote speech on revolution with nonviolence, covering the British Revolution as a case study and explaining how nonviolence in the tradition of Gandhi is not a method of enforcing particular interests but of opening a process of seeking and finding conflict resolution by creating conflict transformation based on cooperative management with one’s opponent in the community.

“It was Gandhi who had the deepest influence on the people who practiced the Christian peace movement in the world, for example, Reverend Martin Luther King Jr.,” said Kwon Soo Young, Dean of Yonsei University United Graduate School of Theology. “Gandhi’s practice and vision of peace is a must-have theme for all of us - for the religious and the non-religious, and in the age of conflict and division.”