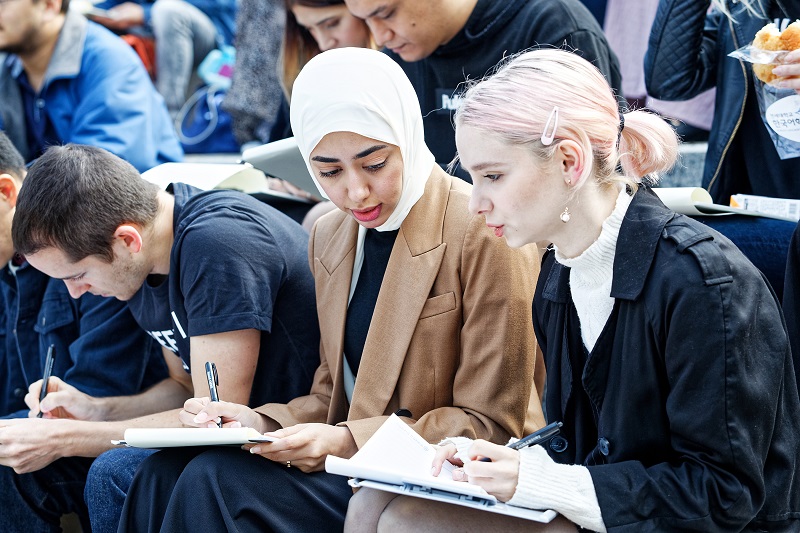 Since 1992, KLI has held the annual contest to commemorate Hangeul Day, the day King Sejong the Great promulgated Hunminjeongeum (the Korean Alphabet) on October 9, 1446, celebrating the Korean language and culture among Koreans, overseas Koreans, and the international community. For the past 27 years, over 38,000 foreigners and overseas Koreans from over 100 countries have participated in writing themed essays and poems to show off their Korean language skills as well as share the spirit of understanding and respect through cultural exchange in Korean.

This year’s contest hosted 1,057 participants from 58 countries and 16 institutions, including international students learning Korean as well as foreign workers and marriage migrant women residing in Korea. Overseas contests were also held at the Defense Language Institute (DLI) in the U.S., Shandong University in China, and the Korean Embassy in Japan.

On the early morning of the competition, participants sat in the outdoor Amphitheater on campus, holding manuscripts, pens, and application forms in their arms as the themes for the contest categories were announced - “Shoes” for essays and “October” for poetry. They spent the day in the sun, writing entries and chatting with each other.

"I felt great joy and have so much fun learning Korean," remarked Sophia, one of this year’s participants. "I will never forget participating in this contest."

"Learning the Korean language is huge all over the world," said Genie, a contestant who has been attending classes at KLI for three semesters. "As someone who loves Korean culture, I'm honored to take part in this contest."

The first place award of the 28th Korean Language Writing Contest for Foreign Nationals went to Maki Sakai of the poetry category. Maki, who won the Yonsei University Presidential Award, will be awarded a trophy and 1 million won in prize money.

The Korean Language Writing Contest for Foreign Nationals is supported by organizations that are committed to promoting Korean language development and international exchange of Korea. This year, sponsors (including major Korean companies such as AmorePacific, Kyobo Book Centre, Woori Bank, organizations such as the Overseas Korean Foundation, Yongwoon Scholarship Foundation, and Lee Heui Keon Korea-Japan Exchange Foundation, as well as academic institutions including King Sejong the Great Memorial Society and Oesolhoe) awarded an array of prizes to diverse participants with outstanding writing skills and creative Korean calligraphy styles.  The official award ceremony will be held at Yonsei KLI on October 23, 2019.

The 28th Korean Language Writing Contest for Foreign Nationals held this year coincides with the 60th anniversary of the Yonsei Korean Language Institute, which was first established at Yonsei University in 1959 as the nation’s first institute to provide intensive Korean language classes. Since its founding, KLI has taught the Korean language and culture to over 150,000 students, diplomats, and non-native speakers.