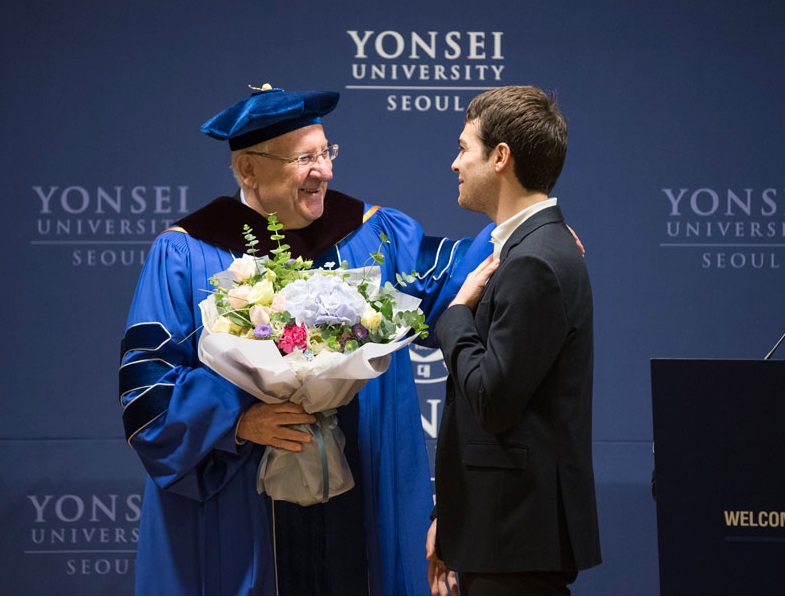 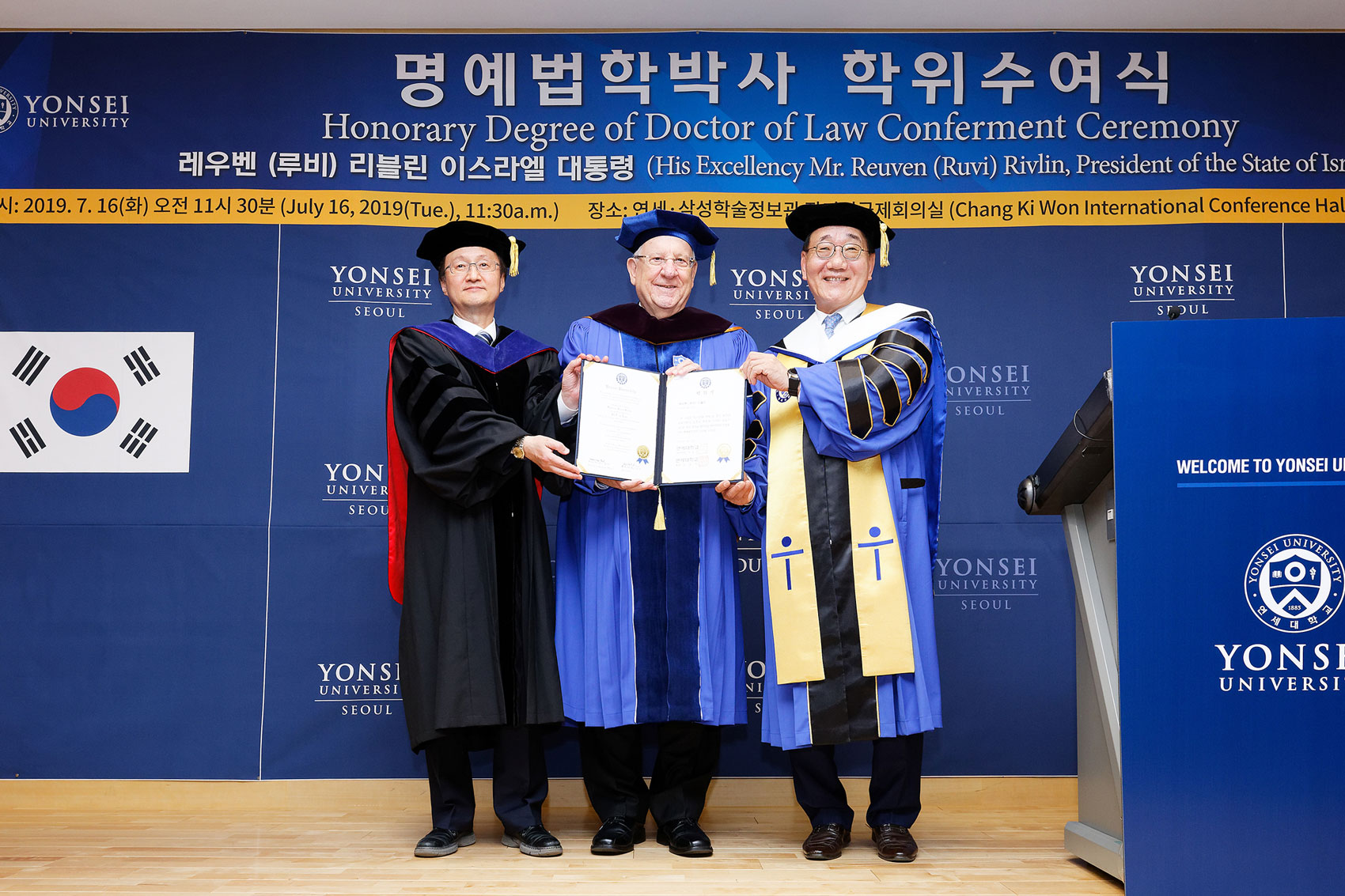 Yonsei University bestowed an honorary doctorate in law to President Reuven (Ruvi) Rivlin of the State of Israel last Tuesday in a ceremony held at the Yonsei-Samsung Library on its main campus in Seoul, Korea.

The doctorate was awarded in recognition of President Rivlin’s accomplishments as a public leader and administrator, especially his contribution to the economic and political development of Israel under his vision of “Israel’s Hope” to strengthen coexistence and partnership throughout Israeli society that leads to “New Israeliness.” President Rivlin has also played a defining role in building collaborative ties between Yonsei University and the Middle East region, including Israel.

“Today’s honorary degree conferment ceremony for President Rivlin will open many doors,” said Yonsei University President Yong-Hak Kim during his welcoming remarks. “I sincerely hope that the future expansion of exchanges and cooperation among Israel, Yonsei University, and Korea will greatly benefit all parties involved.”

At the degree conferment ceremony, President Kim awarded the honorary degree of doctor of law to President Rivlin in the presence of over 100 distinguished guests. Attendees included the Israeli presidential delegation as well as senior figures from universities and institutions in Israel and Korea such as President Menachem Ben-Sasson of the Hebrew University of Jerusalem and 22 Israeli university presidents and education officials.

Omri Fridman (entering class of ’18, College of Human Ecology), an Israeli student in his sophomore year at Yonsei University, presented President Rivlin with a congratulatory flower bouquet on behalf of the Yonsei student body. 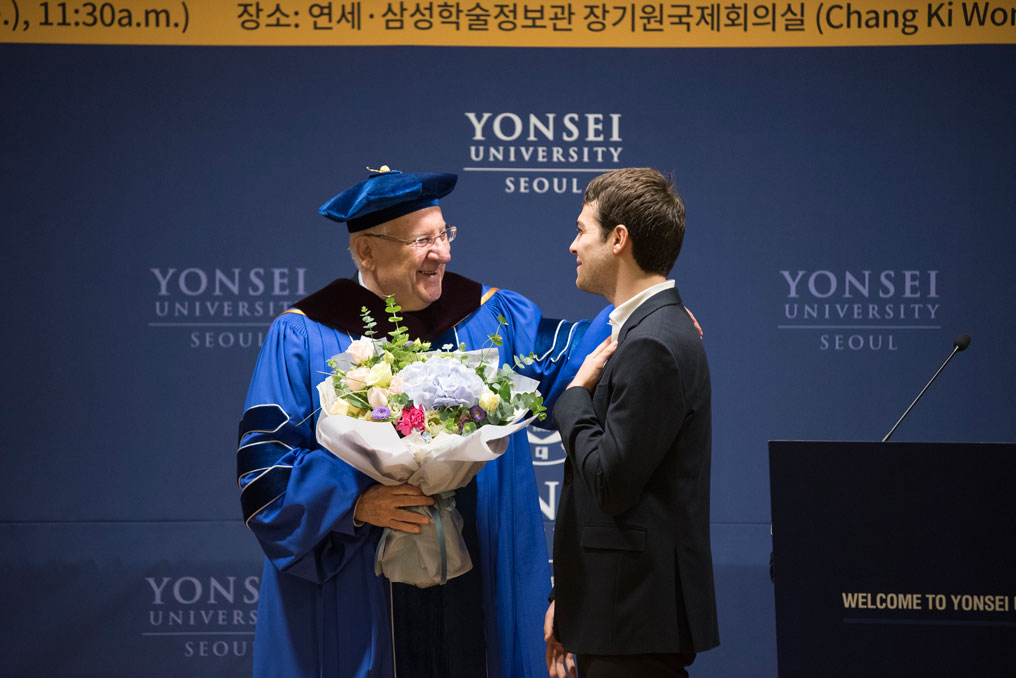 “As someone who studied law at Israel’s Hebrew University in Jerusalem and dealt with law and legislation his entire life, it is such an honor to accept a Doctorate of Law from this great university which is dedicated to the pursuit of truth,” said President Reuven Rivlin during his replying address. 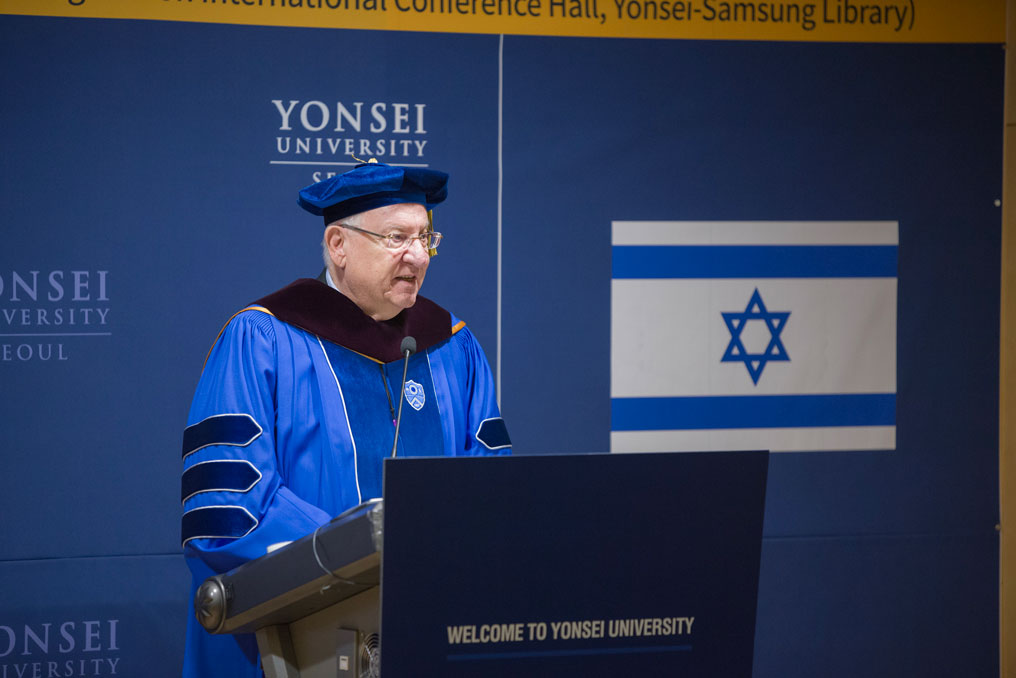 Prior to the degree conferment ceremony and in his presence, Yonsei University concluded five MOUs with five leading Israeli universities: collaborative research and technology transfer agreements with Yonsei's three student exchange partners Hebrew University of Jerusalem, Tel Aviv University, and the Technion, as well as new MOUs with Bar Ilan University and the University of Haifa.

Yonsei University first began its institutional relations with Israel in 1989 via a student exchange agreement with the Hebrew University of Jerusalem.