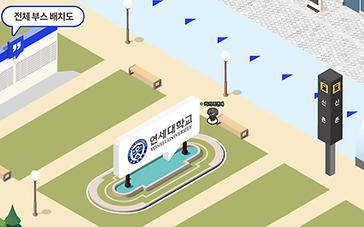 The following job fair was a new attempt in many ways. First, the job fair, which used to be held offline, was held in an online virtual space using a metaverse in consideration of the ongoing pandemic. Students accessed the metaverse's virtual space to attend various job presentations, as well as job counseling while sharing information and interacting with friends online.

Additionally, with the job fair held for a coalition of top six Seoul-based universities (Yonsei, Seoul National, Korea, Sungkyunkwan, Sogang, and Hanyang), there was active participation from corporations that used to maintain a passive stance towards online job fair. A total of 68 companies, including major corporations like Samsung, LG, POSCO, and Hyundai Motors, participated in the job fair.

The 2021 Yonsei Online Job Fair managed to bring the job fair to virtual space using a metaverse platform called ‘Gather Town,’ as students and recruiters from each company would access the job fair as virtual characters. With Gather Town supporting screen sharing for live webinars, as well as a feature for video conversations to be automatically started when characters directly touch another, such features were actively used in the job fair during job counseling sessions.

Respective virtual lobbies were constructed for respective participating universities, with the lobbies made in consideration of the signature designs of each university. For instance, Yonsei University's virtual lobby starts with 'Sinchon Station', and in the center of the map stands the Eagle Statue that represents Yonsei, giving students accessing the job fair a sense of familiarity.

The job counseling center was lined up with counseling booths for companies, making it look just like the offline job fair. Students had the chance to move their virtual characters as they visited booths of their choice for counseling. In each booth, recruiters from the participating companies were stations to carry out the counseling, with the booths decorated with the company logo and the title of the ongoing counseling for convenience in identification.

The venue was designed like a stadium, ideal for accommodating a large group of people at once. Recruiters would carry out programs such as live presentations, Q&A, and briefing sessions for up to 10 companies were held in relay every day.

Souvenirs, one of the beauties of a job fair, cannot be left out. Students who complete the counseling would receive designated points from the recruiters, which could be used in the 'point shop' to be exchanged with mobile vouchers for a wide range of rewards such as Starbucks coffee, chicken and pizza.

The job fair drew keen attention from students preparing for employment, with 439 students from Yonsei university participating.  In particular, through a new method using a metaverse, students were able to interact more intimately with the recruiters and obtain employment information without having the be concerned with space constraints. Yonsei University plans to further expand its job support programs to enhance students' capabilities as they prepare for employment upon graduation.