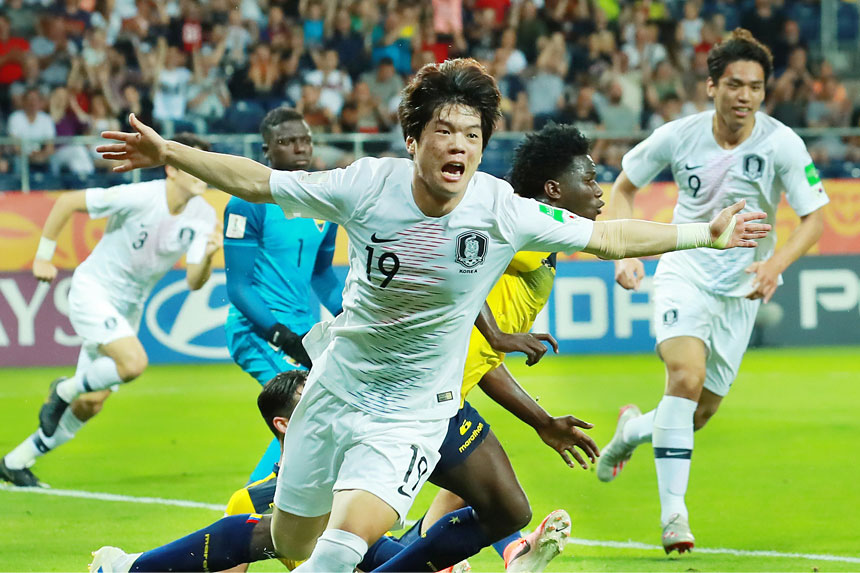 The FIFA U-20 World Cup 2019 semifinal was broadcasted live on June 12, and South Korea was on the threshold of making it to the finals for the first time in history. In the breathtaking Ecuador vs. South Korea match, Choi Jun (entering class of ‘18, Sports Industry Studies) scored the winning goal with a powerful right-footed shot. Onlookers and people around the world watching the game live on television gave huge cheers. 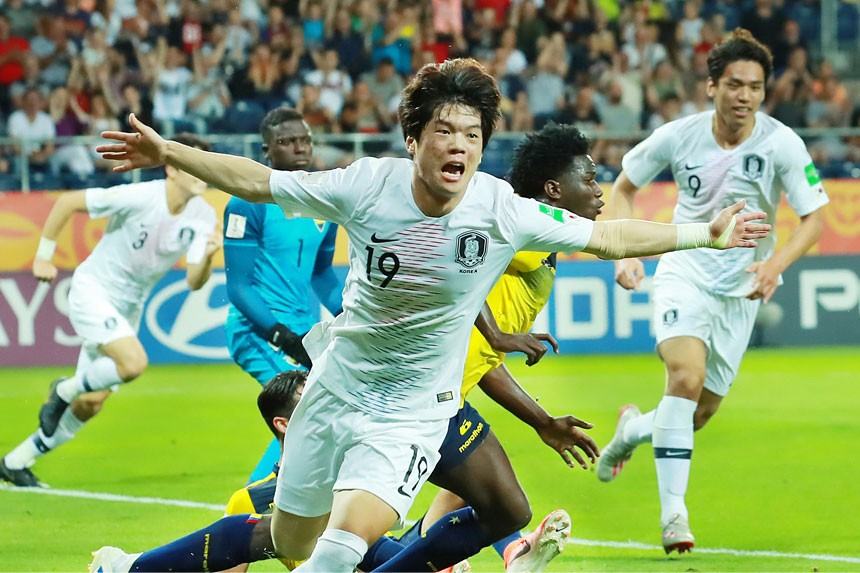 Choi shouts with joy after scoring his first goal during the U-20 World Cup semi-final against Ecuador. This goal, which opened the door to the final, was selected as one of the best goals of this year’s competition.
“After the U-20 World Cup, I couldn’t take a proper break because I had to make so many appearances on TV shows and do interviews,” said Choi. “I prefer a daily routine of eating and sleeping well to manage my physical condition, but I was too busy with interviews, studying, and going to practice.”

Choi Jun entered Yonsei University last year in 2018 and was selected as a 2019 U-20 World Cup national football team player. In an interview with Yonsei University, Choi shares his journey, his dreams, and his challenges.

Dedicating his life to football

Choi Jun’s passion for football is incomparable to any other. Three generations of his family, including his grandfather, father, and older brother, were football players. However, they were all forced to end their careers early due to injuries. Choi, the youngest son in his family, is currently the only active player among his family members.

Like the old saying, “You always just go with the crowd,” a 10-year old Choi started playing football like his older brother when he was a third-grader in elementary school.

“When I was young, my brother played football, so I naturally started playing alongside him. About a year after I started, I decided to become a professional football player. But it was not easy to manage both studying and playing as I expected; I was at a crossroads. After thinking it over carefully, I decided to dedicate my life on football.”

“Hojin and I were the only college players in the U-20 World Cup national football team. Most of the other players belong to professional teams. This fact could have easily intimidated me, but I was rather confident because I believed that our university (Yonsei University) is just as good any other professional team – it’s a top-notch university for football. I wanted to make our university shine by performing well in every game I was I in.”

Since Choi started playing football following his brother, he naturally became Choi’s life mentor. He said that it was also his brother who helped him back up when he wanted to give up playing.

“I had a difficult time after entering high school - I had a slim chance of being selected for the team because there were so many excellent players. I was worried that I would not become a football player since I was not opted to play in the games. My brother comforted me with words of encouragement, such as ‘Don’t give up football like I did’ and ‘You can do well.’ It made me think that I should secure a strong position as a football player for my brother, who quitted playing football. It is my dream to play in a professional football team like Germany’s Bundesliga. Also, my ultimate goal is to play football for a long time.” 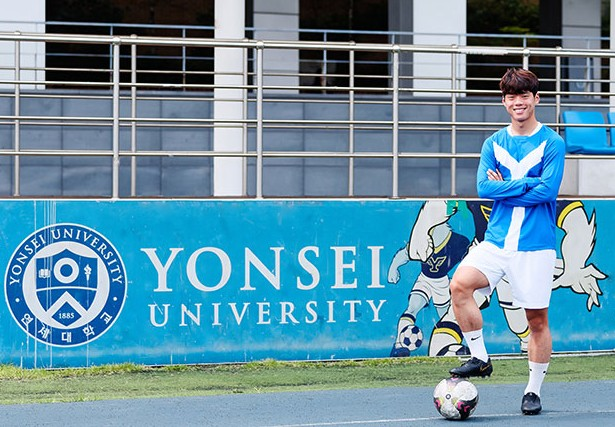 From side attacker to side defender

In football, abandoning a familiar position and taking a new one needs careful consideration. A position change can lead to victory by reversing the dynamics of the team, but the risk is high. The same applied to Choi, who used to play as a side attacker at Ulsan Hyundai High School and changed his position as a side defender when he entered Yonsei University. Despite all these concerns, however, he has been showing outstanding performance with sharp crossings and fast speeds.

“I started to play as a side defender at the suggestion of my coach - I wasn't that interested at first. I watched many football match recordings to up my game, and then one day, I got to watch player Lee Yong’s video by chance. After watching his sharp crossing for a goal, I became interested in becoming a side defender.”

Since then, Choi is said to have been completely focused on practicing crossing. In particular, he was deeply engrossed in learning about the direction of crossing. He was convinced of his new position after watching his crossing make a goal in a game. And so, Choi has successfully grown from side attacker to side defender.

Aiming to become a multiplayer of both studies and sports

Choi, who has returned to Yonsei after the competition, is currently focusing on his studies, showing his passion for both education and sports.

“I think that managing my grades is as important as football. It was hard for me to keep up in classes as there were many team training practices for the U-20 World Cup. Now, I usually take classes in the morning and practice in the afternoon. I hope to get to know my classmates better.”

Choi picked his most memorable game as the 2018 Yon-Ko Games (Yon-Ko Jeon), the annual sports matches between rivals Yonsei University and Korea University. Citing that the last year’s win was unforgettable, Choi aims for the Yonsei University football team’s third consecutive win this year. He seemed determined and fully prepared for the 2019 Yon-Ko Games, which will take place during September 6-7, 2019.

“The goal of this year’s Yon-Ko Games is to win at least 2:0. I will play intelligently even if I lose ball possession. I hope many Yonseians will come and cheer for our team this year. I would like to say to the players of the five Yonsei sports teams (football, baseball, basketball, ice hockey, rugby) for the Yon-Ko Games that, ‘although there will be many tough times during the matches, let’s do our best to play well for our fellow Yonseians who will be there to support us.’”