Taking the Lead in the Journey Toward a Sustainable Future December 01, 2017

Former UN Secretary General Ban Ki-moon joined Yonsei University to champion a green future for the global community. In the 132nd year since its foundation, Yonsei University last April established the Institute for Global Engagement and Empowerment (IGEE) by marshaling independent volunteer and mission groups sown throughout its main campus and the Health System. With the University’s awareness of its capacity to act upon the mounting social issues within society and the global community at large, the IGEE is set to mobilize inherent human and intellectual resources to address humanity’s increasingly urgent problems and needs.

Dr. Ban Ki-moon worked toward a better future for humanity during his ten-year tenure as the 8th Secretary General of the United Nations. Now, as honorary chair of the IGEE, he hopes to galvanize social action at Yonsei University.

At the opening ceremony of the IGEE in which Ban was also inaugurated honorary chair, Yonsei University declared its obligation to commit to social responsibility. The day of the ceremony, September 25, marked two years since the UN’s adoption of the Sustainable Development Goals (SDGs), building on the Millennium Development Goals (MDGs). 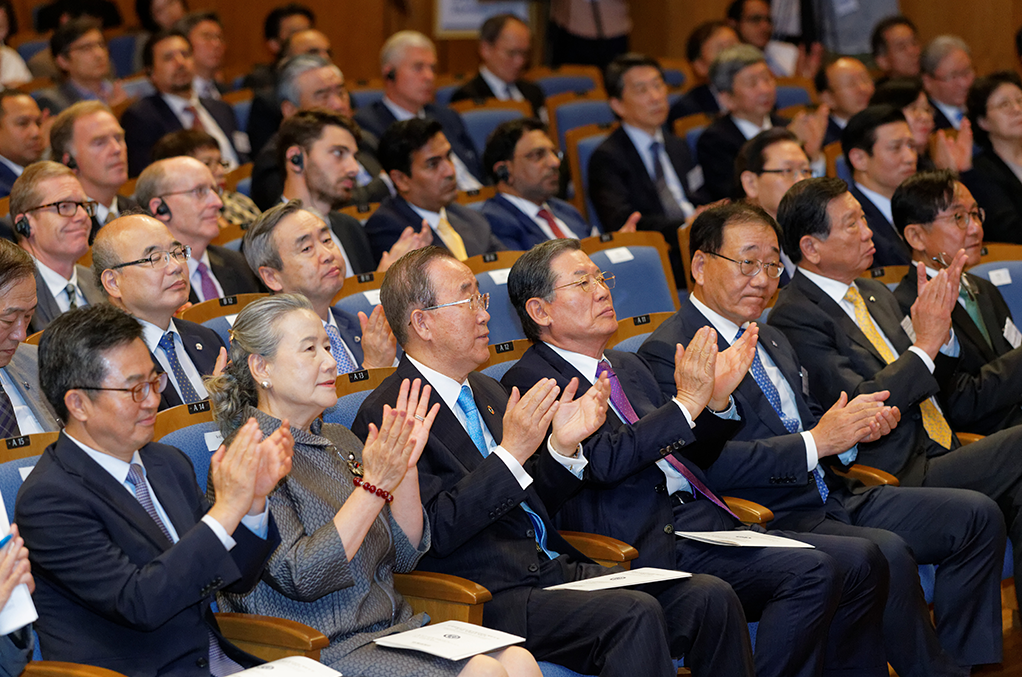 Representatives from various sectors and social institutions attended the opening ceremony to congratulate Honorary Chair Ban Ki-moon and endorse the IGEE, including Deputy Prime Minister and Minister of Strategy and Finance Kim Dong-yeon, Minister of the Environment Kim Eunkyung, Seoul City Mayor Park Won-soon, and Ambassador of the European Union to the Republic of Korea Michael Reiterer. Addressing the audience in a recorded message, Secretary General of the United Nations António Guterres commended his predecessor and the opening of the IGEE. “As Secretary General of the United Nations, Mr. Ban worked tirelessly to advance sustainable development. With this new center, Mr. Ban continues that work, and I offer my best wishes as the Center builds on that legacy.”

Ban expressed his aspirations for the future of Yonsei and the IGEE in his remarks at the ceremony. “I look forward to Yonsei University furnishing an inclusive setting that embraces a wide range of voices and perspectives and where individuals from all walks of life may become participants in meaningful social action.”

The term for the MDGs signed in 2000 came to a close in 2015, during Ban’s tenure as UN Secretary General. The SDGs were devised as a successor to the eight original MDGs and shifted focus primarily to sustainable development of the global community in seventeen concrete goals. They were adopted unanimously at the UN General Assembly on 25 September 2015. After striking another monumental accord for the environment the following December referred to as the Paris Agreement, Ban became known to the international community as “Mr. Climate Change” in recognition of his achievements.

The three largest components of the IGEE are the Ban Ki-moon Center for Sustainable Development, the Center for Social Engagement, and the Yonsei Institute for Global Health. Together they constitute a prominent think tank positioned to contribute expert consulting and research services in assessing performance indicators and manpower efforts tied to the seventeen SDGs Ban had advanced.

The Ban Ki-moon Center for Sustainable Development’s role will be to further interdisciplinary cooperation in the exchange of SDG-related data, research and education, pertinent climate change research, and involvement in Official Development Assistance (ODA) projects. The Center for Social Engagement will facilitate opportunities for students and faculty to become more active in social affairs. The Yonsei Institute for Global Health serves primarily to organize medical missionary work, research on North Korean healthcare and unification preparedness, and ODA projects related to healthcare.

Yonsei University President Yong-Hak Kim announced during his welcoming address at the opening ceremony that Yonsei will be hosting the World Sustainable Development Forum to be held in February 2018. The international forum will gather organizations eager to spur sustainable development to thematically discuss implementation strategy and potential future directions. President Kim anticipated that, “This forum will be the first of a series that will grow to parallel the World Economic Forum in influence in the area of sustainable development.”