Thinking about a Better Future

In a hyper-transforming society with increasingly complex challenges that are difficult to solve domestically and internationally, such as the Fourth Industrial Revolution, low economic growth, aging populations, low birth rates, and climate change, a future government must establish its ideals to tackle such challenges and earn a high level of trust from its people. This is because people’s trust in the government empowers the government and improves a country’s competitiveness. The Institute for Future Government aims to become a research platform that discusses alternatives in practice and academia for various problems in Korea and around the world in an effort to establish a trustworthy government in a hyper-transforming society.

What does a future government as envisioned by researchers look like? According to the Institute for Future Government, the ideal future government is an intelligent government (intelligence), an agile government (agility), and a global responsive government (responsiveness). The Institute establishes as its main research goal examining the government’s role in addressing social problems such as how to leverage technology to improve smart governance, how governments can remain agile to respond rapidly to emerging issues, and how governments can respond to international issues. The Institute’s adopted research strategies include the main research topic of Super-trustworthy Government in Hyper-transforming Society along with establishing a scalable module of quantitative and qualitative data and disseminating academic and social research results.

Specifically, the Institute for Future Government conducts a public survey about the government every year. By conducting research projects on the key agenda items collected from the questionnaire survey, the Institute is committed to reflecting in a timely fashion on academic research into public policies beyond theoretical discussions.

Professor M. Jae Moon, who serves as the Director, was chosen as one of the World’s 100 Most Influential People in Digital Government in 2018 and 2019 by Apolitical, a global network in public service. According to Apolitical, Professor Moon published The evolution of e‐government among municipalities: Rhetoric or reality? (Google Scholar Citation, about 2,700 citations), one of the most widely cited papers on e-government; continued his research in this field; provided international consulting, education, and training related to e-government; and conducted a wide range of projects for international organizations such as the Asian Development Bank. Apolitical highlights how advances in digital technology dramatically change how the government works, what public services provide, and how it communicates with citizens. Apolitical has selected the World’s 100 Most Influential People in Digital Government since 2018 upon reviewing recommendations received from experts in relevant fields.

Professor Moon, who leads international research in e-government and contributes to international collaboration and policy efforts in applicable fields, was recognized for his research achievements in Korea and abroad with the Yonsei Academic Award conferred in 2019; appointed Underwood Distinguished Professor three times, in 2009, 2013, and 2020; and awarded the Donald Stone Award by the American Society for Public Administration (ASPA) in 2020 and the Red Stripes Order of Service Merits for his contributions to government innovation in 2021. 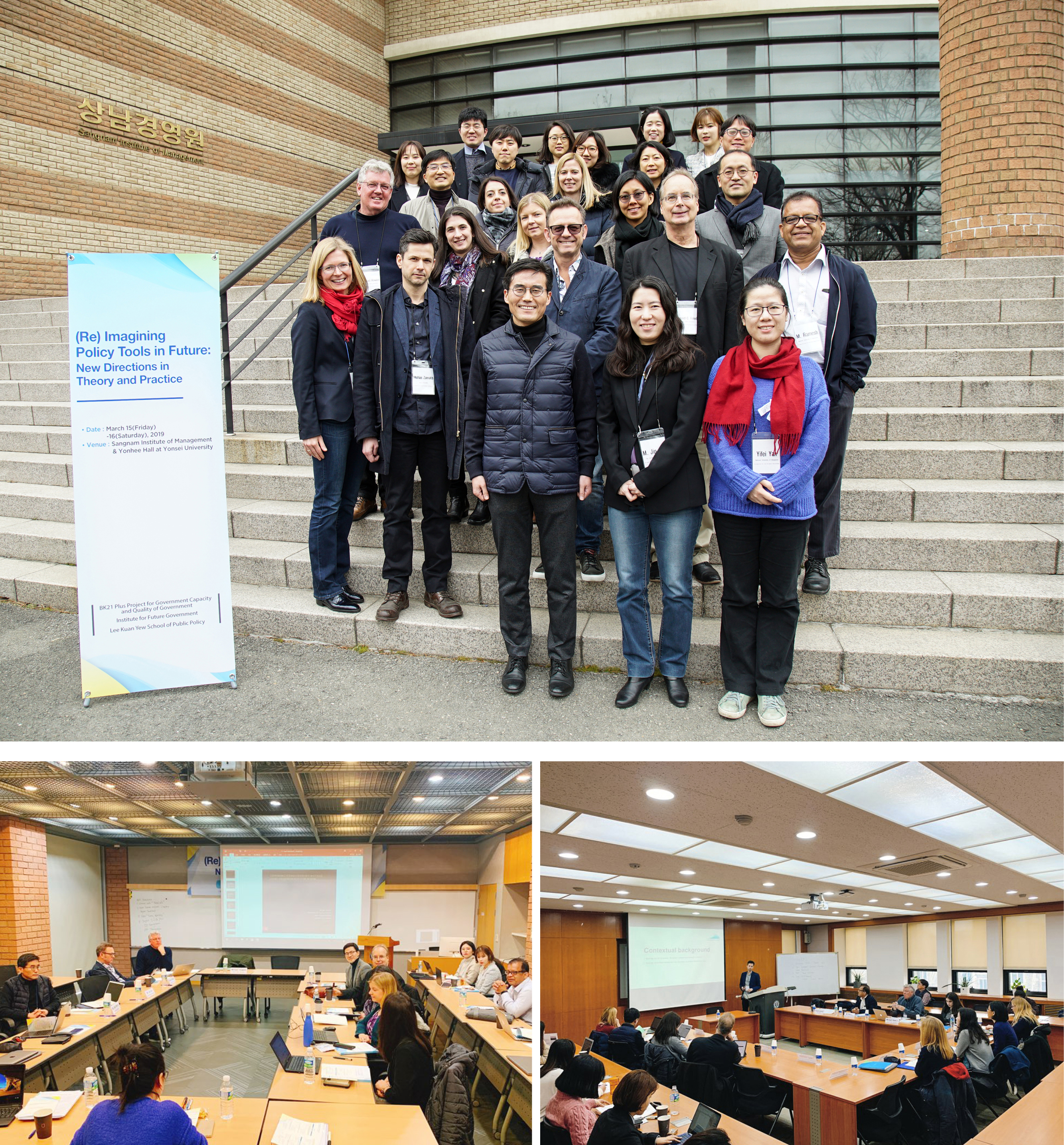 The Institute for Future Government hosts Korean and international seminars and offers a platform for sharing and discussing research opportunities in various fields. As of May 2021, the Institute has continued its academic and networking activities and hosted 30 seminars, including the Governance Forum in addition to the Colloquium, which has been held as necessary, in partnership with the Public Issue Research Institute, the National Assembly Futures Institute, the Quality of Government Institute (QoG Institute) in Sweden, Université de Lausanne IDHEAP in Switzerland, KAIST Moon Soul Graduate School of Future Strategy, Government Employees Pension Service, Jeju Special Self-Governing Province Future Strategy Bureau, and Yonsei University Department of Sociology.

The Institute for Future Government has produced successful research outcomes, as it has published a total of 138 research papers in the past three years, 71 of them in SSCI/SCOPUS.

The Institute for Future Government focuses on academic activities to pre-emptively prepare for and respond to emerging challenges in Korea and abroad. With regard to the research topic governance-related technological changes, which is discussed as being one of the important issues for future society, the Institute hosted the “International Seminar on AI and Digital Government” 10 times between December 30, 2020, and May 17, 2021, continuing discussions on AI and future government through online presentations and debates with notable academics in Korea and abroad.

Following the International Seminar on AI and Digital Government in 2021, it hosts a book concert by inviting authors who wrote remarkable books about future government. 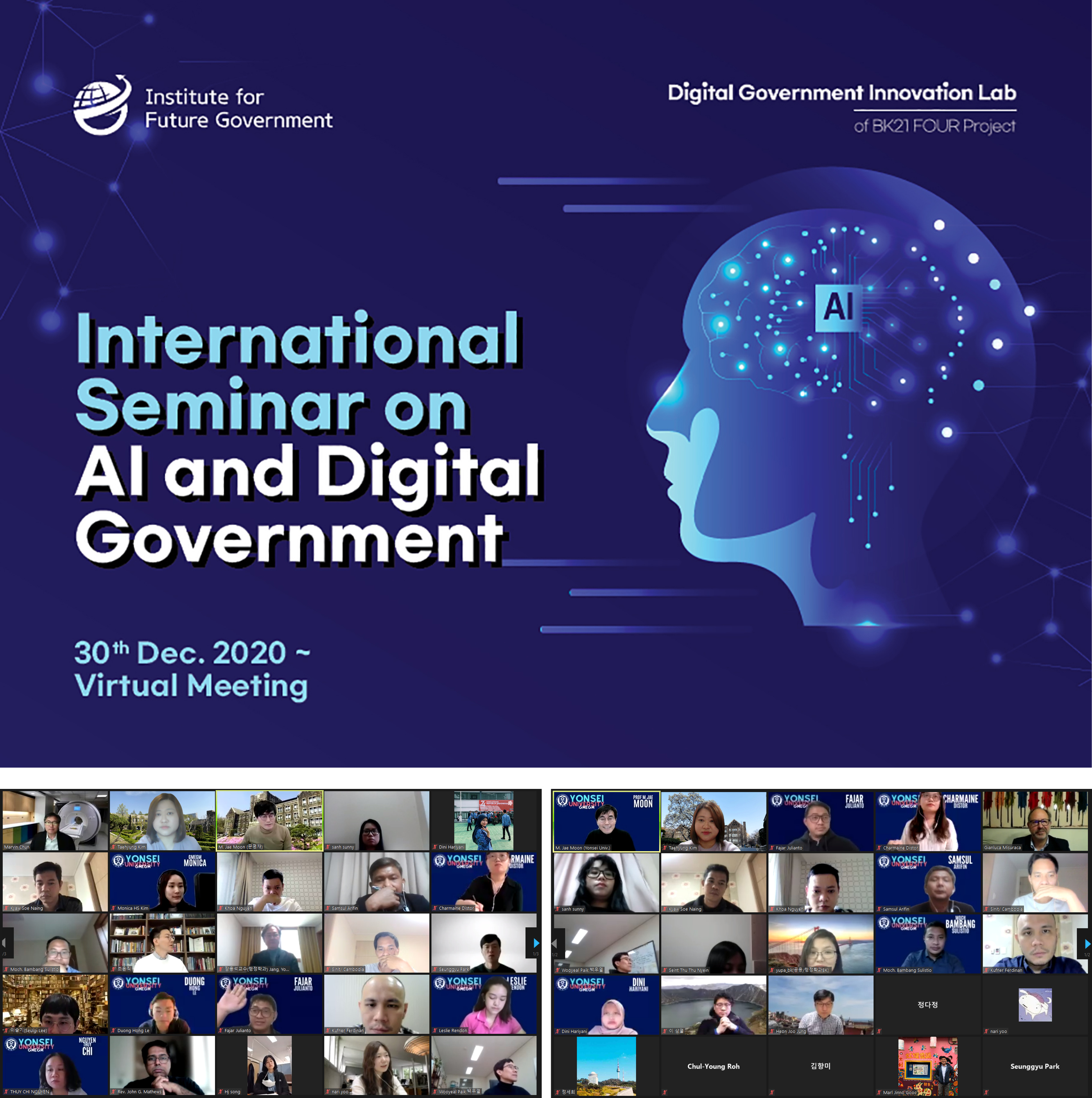 The Institute for Future Government’s research and policy advice activities have translated academic research into the policy agenda and contributed to implementing the ideals of a future government and innovating government policies in an increasing number of cases. In 2019, Rapid Technological Changes in the Future and a Paradigm Shift in Public Services, conducted as a research project for the National Assembly Futures Institute, analyzed opportunities and risk factors arising from scientific and technological advances and subsequent social changes in the future and examined a paradigm for a future government’s organization, personnel, and public services.

In 2018, the Institute for Future Government conducted research projects Improvements on the National Research and Development Project Feasibility Study System and Building a Technological Innovation-Driven Public Procurement System and Implementation Strategy for the Public Procurement Service and the Ministry of Economy and Finance, leading to legislative amendments to the National Finance Act, Feasibility Study Operating Guidelines, and National Research and Development Project Feasibility Study Conduct Guidelines as well as the Enforcement Decree of the Act on Contracts to Which the State Is a Party. Furthermore, with the research project Shared Use of Integrated Administrative Information and Cooperative Governance Building to Provide e-Government Services, which was conducted from 2019 to 2020 for the Office for Government Policy Coordination, the Institute for Future Government describes how to build collaborative governance to provide e-government services.

The Institute for Future Government has conducted examinations of major social issues such as the spread of COVID-19 and the 21st legislative election, analyzed big data about civil petitions from e-People, and contributed to resolving uncertainties about COVID-19-related information and establishing a policy-oriented election through various media, including TV broadcasting, online streaming (YouTube), and newspapers. Furthermore, senior researchers at the Institute for Future Government, including Professors M. Jae Moon and Tae Joon Lah, provide policy recommendations via major media outlets across a variety of areas such as the third sector, social innovation, and diplomatic strategies.

In addition, the Institute for Future Government contributes to various policies and project planning in government (96 cases) and private agencies (4 cases) based on its research achievements. The Institute advises the Ministry of Foreign Affairs, the Ministry of National Defense, the Ministry of Personnel Management, and the Board of Audit and Inspection in the policy area; the National Human Resources Development Institute and Cheonan City in the personnel area; the Korea Institute of Public Administration in the research area; and SK’s Center for Social Value Enhancement Studies in the evaluation area. Furthermore, the Institute has participated in performance reviews and business reviews in public institutions, state-owned enterprises, and executive agencies including the Office for Government Policy Coordination; the Ministry of National Defense; the Ministry of Unification; the Ministry of Culture, Sports and Tourism; the Ministry of Gender Equality and Family; Seodaemun-gu; the National Research Council for Economics, Humanities, and Social Affairs; and the Korea Social Enterprise Promotion Agency. Moreover, it has made its best efforts so that the ideals of a future government can be used in each organization’s operational directions and strategies.

While innovation in the private sector led by companies drives future changes, innovation in the public sector, especially the government, has some structural limitations, which make it difficult to implement innovation voluntarily and pre-emptively. However, given the existence of institutes such as the Institute for Future Government, which thinks deeply about the ideals of a future government in line with the rapidly changing needs of the era and suggests sustainable development through government innovation, we can look forward to a better Korea.

A future government is something to predict but also an outcome we should achieve. We meet Professors M. Jae Moon and Yoon Jik Cho and full-time researcher Dr. Taehyung Kim, who lead the Institute for Future Government, which thinks about a better government and a better world in terms of policy and system, and hear their stories about research on a hyper-transforming society and future government.

“Researching future government is like stroking an imaginative brush against the background of reality.

A hyper-transforming society requires a stronger brushstroke beyond the existing background.

A strong brushstroke can be made possible by an understanding of disruptive technologies like AI, a deep reflection on civility, and a prediction about challenges such as COVID-19 or climate change.”

M. Jae Moon, Dean of the College of Social Sciences / Director of the Institute for Future Government, Professor at the Department of Public Administration

“An ongoing panel survey on public servants is conducted in the context of engaging administration to provide implications on how to improve public servants’ competences, attitudes, and behaviors to run a future government successfully.

“We think about how to strengthen the government’s capabilities so that the government faced with various social problems due to uncertainties in the environment and social challenges can respond more flexibly in future society, and discover policy cases conducive to solving social problems.

Our goal is to share data collected by the Institute for Future Government, subsequently derive research outcomes, and establish a research ecosystem that can contribute to society tangibly.”