Discovering a solution for AI semiconductors in a bio-derived material 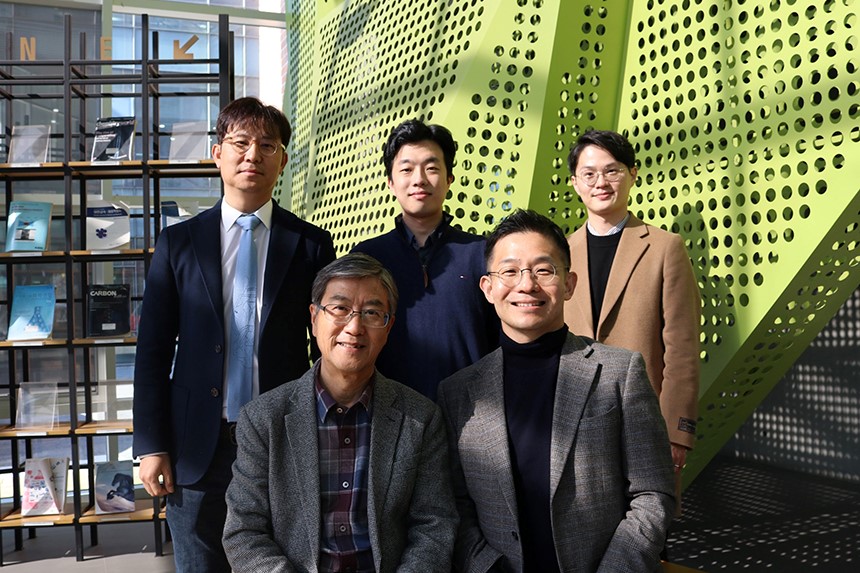 The human brain demonstrates excellent energy efficiency in memory and learning processes. In 2016, AlphaGo shocked many, demonstrating the rapid growth and potential of AI. After AlphaGo’s server was revealed, however, the issues of enormous size and immense power usage resurfaced. AlphaGo needed a huge server with more than 1000 CPUs and uses more than about 1 MW of power for Go. A human, on the other hand, only requires a brain about the size of two fists and uses 20 W of energy, showing the limitations of AI computers.

This is why research on developing small and efficient AI computers that can be hand-operated by users, such as mobile phones and cars, by mimicking the outstanding efficiency of the human brain has drawn attention in recent years.

Professor Jang-Yeon Kwon of the School of Integrated Technology at Yonsei University in Seoul, Korea, developed the world’s first artificial synapse using peptide, a small piece of protein. The study was conducted in collaboration with Professor Ki Tae Nam of the Department of Materials Science and Engineering at Seoul National University, and Professor Yoon-Sik Lee of the Department of Chemical and Biological Engineering at Seoul National University. The result of this study is expected to be used for development of core technologies in AI research, including neuromorphic chips and autonomous vehicles, which strive to mimic the human brain’s excellent energy efficiency and judgment.

The team precisely emulated the complicated mechanism of synapses, neuron-to-neuron connections in the brain, using a peptide biomaterial. A peptide is a short piece of protein composed of a chain of amino acids. Biological systems transmit signals through a unique phenomenon called proton-coupled electron transfer (PCET), during which various protein-peptide complexes are used as regulatory cofactors. Of the more than 20 amino acids, tyrosine plays a key part in the signaling process.

Focusing on the key role of tyrosine in biological signaling systems, the team designed a tyrosine-containing amino acid combination and controlled the physical and chemical properties. In 2014, the team discovered that peptides containing a certain combination of amino acids show spontaneous two-dimensional assembly forming a peptide nanofilm that has the elasticity of spider silk. This result showed the potential of tyrosine-containing peptides as materials for electronic devices.

Based on this, the team has been working on a challenging interdisciplinary project of developing novel electronics by controlling the properties of biomaterials for the past seven years, with the support of the Samsung Research Funding Center. Recently, the team found that the biological signaling mechanism of peptides can be simulated artificially, and succeeded in developing the world’s first proton/electron-based artificial synapse with multiple inputs and distinct from the previously studied artificial synapses. 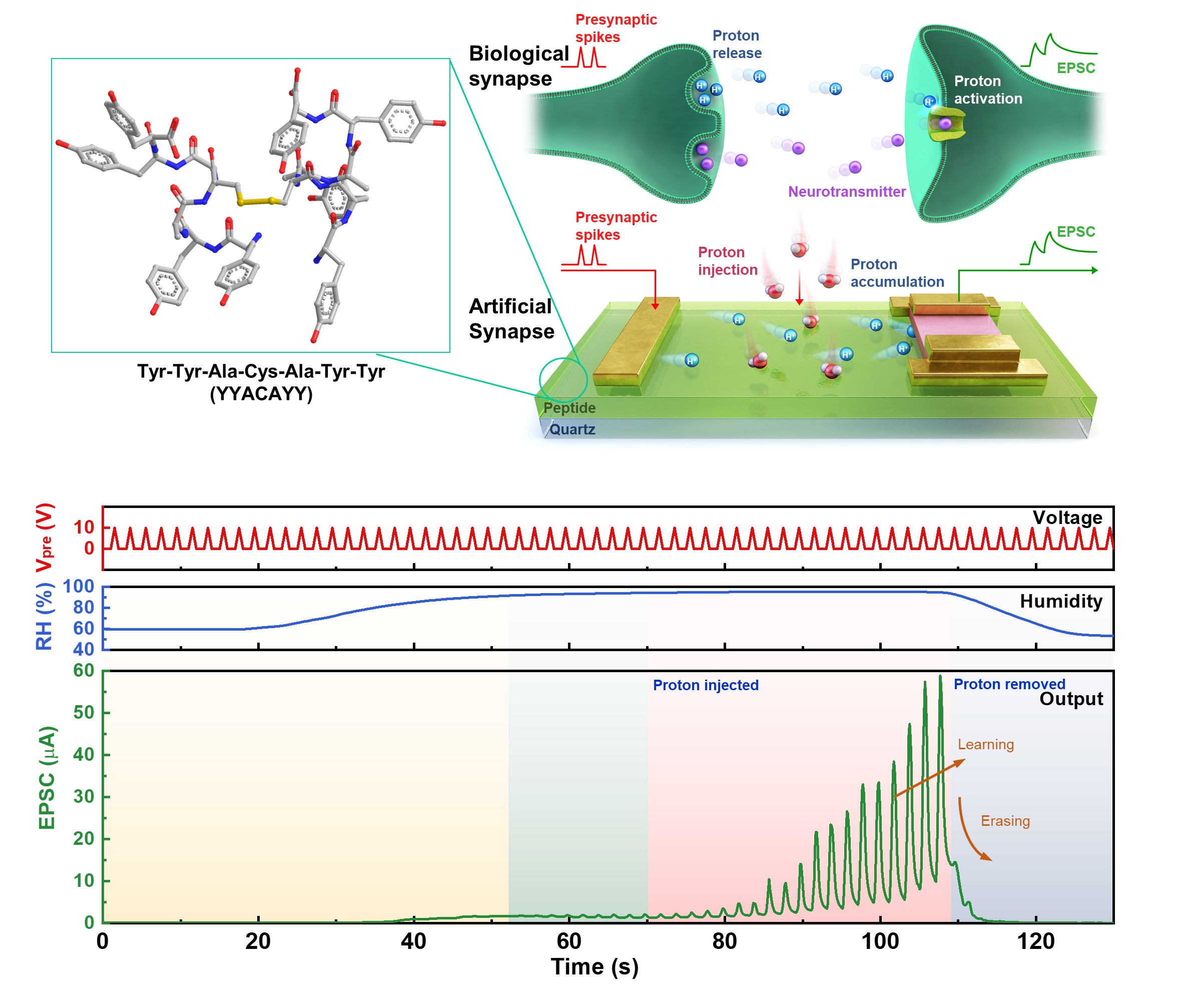 Figure: Schematic and mechanism of the peptide-based artificial synapse

The newly developed synaptic device demonstrated ion-based learning resembling that of biological synapses, and it is capable of spontaneous learning and memory without voltage input. Unlike conventional electronics, it is capable of learning information with proton alone and without any electrical input signal. Such a device can not only drastically reduce the power usage of AI semiconductors, but also simulate in detail the complex and fluid brain functions with multi-input multi-function property, using two independent modes, voltage-driven and ion-driven.

“This study is significant in that it departed from conventional neuromorphic studies that strive to electrically simulate the mechanism of the human brain and actually simulated the complex operation of ions-electrons like in the human brain in great detail,” says Professor Kwon. “We present a new direction for research on AI semiconductors using a biomimetic approach.”

“This is the first study that shows the excellence of peptides as materials for electronics”, says Professor Ki Tae Nam, co-corresponding author of the study. “Peptides will become the new platform of materials that simulate the efficiency of biological systems, controlling ionic movements.”

This study was funded by the Samsung Research Funding Center for about seven years and published on November 19, 2020 (GMT) in Nature Communications.

● Peptide: It is a short chain of a protein, composed of several to dozens of amino acids. The combination of more than about 20 amino acids can yield numerous possible peptide sequences. Accordingly, studies in materials science involve selective design of the physical, electrochemical, and structural functions.

● Synapse: The point of connection between neurons, which play a key part in learning and memory processes of the brain. It is known that formation and loss of memory occur as synaptic connectivity is continuously strengthened and weakened.

● Neuromorphic chip: It is a hardware device for neuromorphic computing, which mimics the computation of the human brain’s neural network. While conventional computers have CPU and Memory connected in series and thus are limited in speed despite excellent performance, neuromorphic chips are designed to simulate the parallel architecture of neurons in the brain, making them suitable for parallel computing that performs multiple simple computations simultaneously.

● Tyrosine: It is an amino acid known to be involved in protein synthesis and cell-cell signaling. During a redox reaction, proton-coupled electron transfer occurs.