A “nanoPCR” technology was developed for the point-of-care (POC) diagnosis of coronavirus disease-19 (COVID-19). This new technology can diagnose the infection within 20 minutes while retaining the accuracy of conventional reverse transcription polymerase chain reaction (RT-PCR) technology.

A team of researchers led by Professor CHEON Jinwoo, the director of the Center for Nanomedicine (CNM) within the Institute for Basic Science (IBS) in Seoul, South Korea, in collaboration with Professor LEE Jae-Hyun from Yonsei University and Professor LEE Hakho from Massachusetts General Hospital developed a novel nanoPCR technology that can be used for the decentralized, POC diagnosis of COVID-19. The technique uses the same underlying principle as the standard diagnosis method of RT-PCR to detect viral RNA, but it also features a vast improvement in speed using hybrid nanomaterials and a miniaturized form factor, allowing portability.

The gold-standard test method for COVID-19 currently used is RT-PCR: a test that amplifies DNA after changing RNA genes into complementary DNAs for detection. RT-PCR has high accuracy, but it takes one to two hours to detect viruses at the centralized facility equipped with bulky instrumentations. The logistics process of cold chain transportation from the sampling sites to the testing facility makes the conventional RT-PCR diagnosis even slower, taking 1 – 2 days to get the results back to the patients.

To overcome the limitations of existing diagnostic methods, the research team utilized a magneto-plasmonic nanoparticle (MPN) that is comprised of magnetic material in its core and a gold shell that exhibits plasmonic effects. By applying MPNs to PCR, they developed 'nanoPCR' which greatly improves the speed of RT-PCR while retaining highly accurate detection. Plasmonic properties of MPN refer to its ability to convert light energy into thermal energy, and by using this, it was possible to shorten the thermocycling step of RT-PCR from 1 – 2 hours to within 11 minutes. In addition, the strong magnetic property of MPN allows an external magnetic field to clear MPNs from the PCR solution to allow for fluorescent detection of the amplified genes. The nanoPCR is capable of detecting even a small amount of genes (~3.2 copies/µl) accurately while simultaneously amplifying and detecting genetic material with high sensitivity and specificity.

The researchers tested nanoPCR under clinical settings through the patient specimen tests conducted with Professor CHOI Hyun-Jung's team at Chonnam National University Hospital. During the test, 150 subjects with or without COVID-19 infection were accurately diagnosed using this technology (75 positives, 75 negative samples; zero false-negatives and false-positives). The level of sensitivity and specificity was found to be equivalent to that of the conventional RT-PCR (~99%). In addition to high reliability, the whole diagnostic process was considerably fast, as on average it took about 17 minutes for the diagnosis of one specimen.

In addition, the researchers showed the possibility of improving the analytical throughput by applying a Ferris wheel system to load multiple samples at once, which would allow for simultaneous testing of many samples from multiple patients. Notably, the nanoPCR equipment is very compact in size (15 × 15 × 18cm) and weight (3kg), which allows it to be portable. All of this would pave the way for rapid, decentralized testing of patients for the POC diagnosis.

“Through the improvement and miniaturization of the PCR technology, we have shown that it is possible to perform PCR based POC diagnosis in the field quickly," said Director Cheon. The research is currently at a proof-of-concept stage and requires further developments until it can be used in the field. 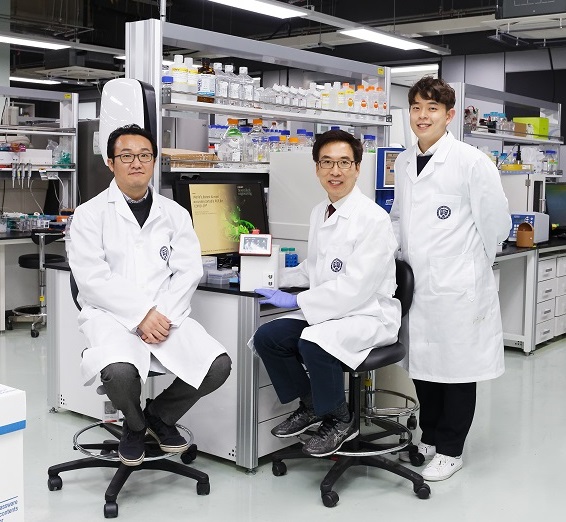 The Institute for Basic Science (IBS) was founded in 2011 by the government of the Republic of Korea with the sole purpose of driving forward the development of basic science in South Korea. IBS has 31 research centers as of September 2020. There are ten physics, three mathematics, six chemistry, six life science, one Earth science, and five interdisciplinary research centers. 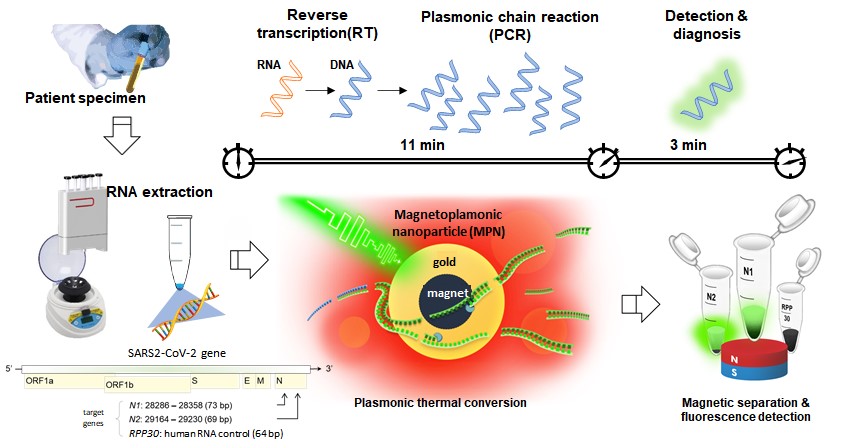 The RNA of the coronavirus was extracted from the patient sample, which then underwent reverse transcription, gene amplification, and detection through nanoPCR to diagnose the COVID-19 infection. For rapid gene amplification and detection, magneto-plasmonic nanoparticles (MPNs) were used to facilitate the temperature change cycle of the existing RT-PCR at high speed. Finally, a magnetic field separated the MPN, and the fluorescent signal of the amplified DNA was detected.

NanoPCR used the plasmonic effect of MPN to perform the RT-PCR process for amplifying coronavirus genes in 11 minutes and then detected the amplified genes within 3 minutes using a magnetic field. To implement this principle as a point-of-care (POC) device, a small and lightweight device was designed. This nanoPCR device was designed to immediately diagnose COVID-19 in the field with the same sensitivity and specificity as the existing RT-PCR technology. 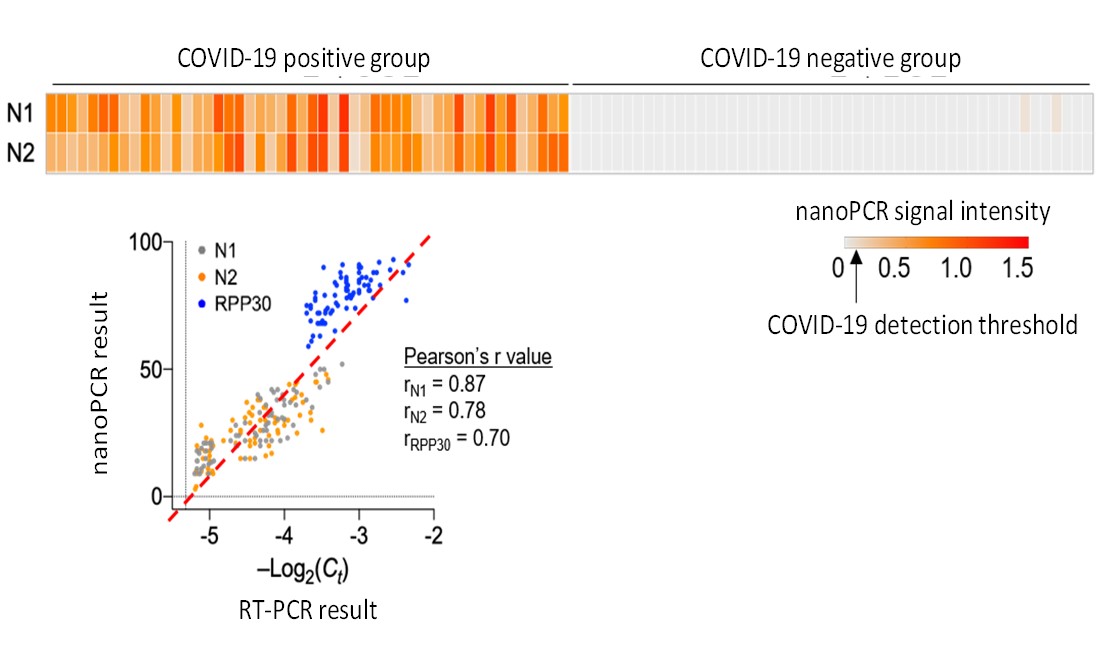 150 COVID-19 patients (75 positive, 75 negative) specimens were tested for the virus using nanoPCR, and the positive and negative groups were accurately classified (false positive and false negative rates were 0%). This result was confirmed to have very high statistical similarity (substantial correlation in Pearson’s r value) and similar accuracy to the standard RT-PCR.