Professor Sang-kook Han’s research team successfully enables communication using LED and an image sensor of a camera at the fastest speed in the world.

It will be soon available to communicate without an additional network if you have the light and an active pixel camera sensor (CMOS). Location-based service (LBS) and Internet of Things (IoT) will be available using smartphones wherever there is LED light.

Yonsei research team led by Professor Sang-kook Han announced that they developed “optical camera communication” that allows data transaction at the speed of 9kbps, using the LED light and the camera image sensor. This marks the fastest speed in the world. A number of institutes in other countries including the U.K. only succeeded in communication at 2 to 3kbps.

Optical camera communication is similar to the LiFi technique, which utilizes LED light for communication. LiFi sends and receives data using the visible light contained in LED light. Even though LED light is perceived continuous to human eyes, it actually blinks at an interval of one millionth second. This blinking can be interpreted as “0” and “1” as in digital signals, allowing things to communicate through waves instead of frequency. In theoretical terms, this technique can send data 100 times more rapidly than WiFi.

LiFi networks require devices like photodiodes (PDs) for transmission and reception. A telecommunication infrastructure should be equipped with receptors for optical communications additional to LED. Professor Han points out that not only these devices are pricey, but inappropriate for smartphones as they are not suitable in mobile environments.

The optical camera communication developed by Professor Han’s team utilizes an image sensor of the camera as the transmitting and receiving device without any additional apparatus. The system allows communications in IT devices, which are often small and light. Recently, the team has successfully performed an experiment for Samsung Galaxy smartphones, where the data were sent and received using the embedded image sensor. 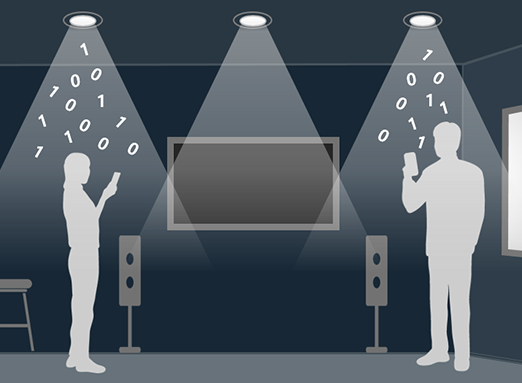 The team is conducting research on increasing the speed of telecommunication using the “algorithm for rapid data reception obtained from image sensor,” for which they recently applied for a patent. Professor Han said “considering the current technological development, we would be able to see the commercialization of services at an Mbps-level speed by 2018.” Now the technology is no more than sending over text data, but the implementation of the Mbps-level speed will enable telecommunication of images and small video files based on image sensors.

If this technology is commercialized, LBS will be available in places where LED lighting is installed. If the technique is applied in other devices such as the image sensor in the black box within a vehicle, one may enjoy a “connected car,” which can communicate with LED street lights or send and receive data using the car’s LED rear lights. “We are also developing an AR service based on image sensors by using the blinking of various visible lights,” said Professor Han, adding that “we are exploring more applications.”

The results of his research were submitted to two SCI journals. In addition, he gave a presentation about the technology at 2016 OptoElectronics and Communications Conference (OECC) held in Japan.