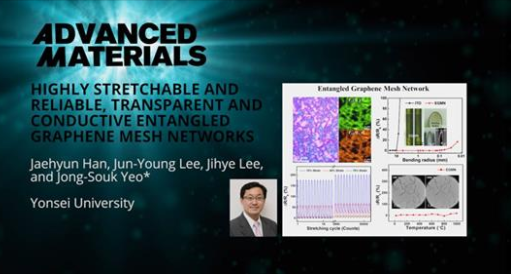 Conventional electronic devices are mostly made of silicon and metal, which makes them brittle, rigid, and relatively heavy. Such devices cannot meet the requirements of user-oriented emerging applications, like wearable devices, flexible or deformable displays, and bio-integrated healthcare devices. Soft electronics could meet those requirements as long as they are designed to have superior flexibility, stretchability, transparency, and lightness. More importantly, the electrical and optical properties of such material systems should be stable under a wide range of mechanical and environmental conditions.

Therefore, new materials have been proposed, such as two-dimensional (2D) graphene and one-dimensional (1D) nanowires. While nanowires are much more stretchable than 2D graphene sheets, their electrical and mechanical stabilities may not be sufficient for the abovementioned applications. To address this, a research team from Yonsei University, Seoul, Korea led by Prof. Jong-Souk Yeo, developed a conductive material called entangled graphene mesh network (EGMN), which is highly reliable, stretchable, and transparent.

Their approach to a stretchable transparent conductor is quite ingenious as their unique material design benefits from both the excellent material properties of graphene as well as the structure of entangled network that is stochastic and isotropic, thereby providing greater stretchability. This unique combination enables them to demonstrate excellent electrical reliability, mechanical durability, and thermal stability, while serving as a transparent conductor.

The entangled graphene network is fabricated by beginning with a copper substrate coated with a 2D graphene sheet. The coated substrate is then placed inside an etchant solution, which eats away the copper as time passes but does not affect graphene. As micro holes start to form in the copper substrate, the graphene layer cannot stay flat and starts to wrinkle along the edges of these holes. Prof. Yeo explains: “Wrinkled and crumpled graphene is energetically more favorable than the ﬂat structure when there is no supporting layer. Then, the areas undergoing this etching process gradually expand until the copper substrate is completely removed. Finally, the 2D graphene turns into the EGMN structure.”

The unique properties of EGMN were thoroughly analyzed by the team. First, optical and scanning electron microscopy images of EGMN were taken, and EGMN was found to have a structure similar to that of a percolation network. This structural characteristic enables EGMN to accommodate external mechanical stress via unfolding the wrinkles when a stretching force is applied.

Secondly, the optical and electrical properties of EGMN were analyzed via transmittance and sheet resistance tests. As EGMN is compressed and shrinks, it becomes less transparent but improves its electrical characteristics. The team found out that nitric acid could be added to further reduce the sheet resistance of EGMN.

Thirdly, the flexibility and stretchability of EGMN was directly tested via repetitive mechanical tests which involved bending and stretching a flexible and stretchable substrate after EGMN was transferred onto it. By measuring the almost negligible changes in resistance that EGMN underwent, the team concluded that their material was very resilient to mechanical stress, unlike previously proposed flexible conducting materials.

Finally, the team determined that EGMN was stable even under very high temperatures of 1000 °C and after being exposed to humid environments for a month. “Our results demonstrate that our novel EGMN can significantly broaden the application areas of stretchable transparent conductors for various types of wearable and stretchable devices,” concludes Prof. Yeo.

With materials such as EGMN being developed, a new generation of electronic devices might be just around the corner. You can find more information in the video abstract found here.