New Catalyst to Advance the Commercialization of Hydrogen Energy

Yonsei University announced in last March that one of its research teams successfully developed a catalyst for hydrogen evolution reaction, by synthesizing optimized superatomic particles of an alloy that have optimum hydrogen-adsorption energy, using a controlled superatomic particle generation technique.

Since hydrogen energy does not have restrictions of depletion or an imbalance in geographical distribution, and is economically friendly, it is a promising future energy source. In recent years, increasingly more attention has been paid to the development of catalysts that can effectively generate hydrogen by decomposing water. Platinum, which is a noble metal, has been commonly used as the catalyst, but its high price and low stability have been pointed out as its shortcomings. In order to overcome these limitations, there have been many research efforts for development of good catalysts. Nonetheless, there have been a lot of challenges as regards the commercialization of catalysts due to their complex structures and synthesizing process, a high overvoltage required for the reaction, and the low efficiency of hydrogen generation. 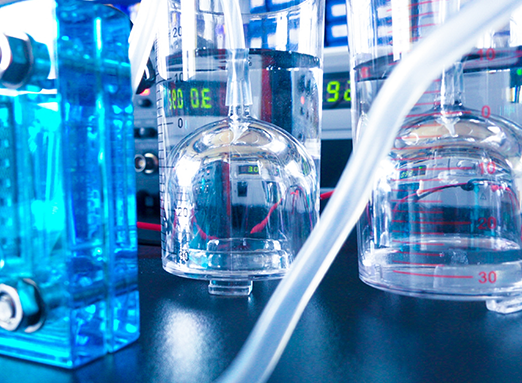 Against this backdrop, the research team led by Professor Dongil Lee at Yonsei University focused on superatomic particles whose composition can be controlled at the atomic level in order to create a new catalyst that can outperform the conventional catalysts. Superatomic particles are composed of a small central metal that is combined with several to hundreds of metal atoms, and a metal-ligand film that stabilizes the core metal. Each element participates in determining the properties of the particle, behaving like a large-sized atom. Its size ranges from that of a single atom to a nanoparticle. The electromagnetic, optical and electrochemical properties of superatomic particles depend sensitively on the type, number, composition, and structure of the elements, making them a new form of functional material whose characteristics can be controlled at the atomic level. The technique can be an innovative material for catalysts as tailored designs and manufacturing is available at the atomic level, depending on the reaction of each catalyst.

Professor Dongil Lee at Yonsei University says “the newly developed catalyst using the reaction-tailored superatomic particle is expected to contribute to commercialization of hydrogen energy.” He highlighted the significance of the research by mentioning that “the control technique of superatomic particles that was applied in this study will be applied in the development of customized catalyst in various fields besides hydrogen generation, including energy and environment.