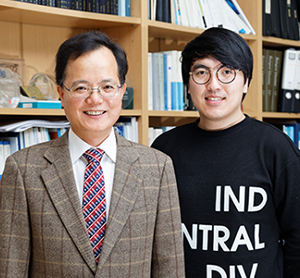 Cellular ion concentrations are tightly regulated by natural channels/transporters for sustaining life processes. Synthetic anion transporters have received attention as therapeutic agents because of their potential in destroying cellular ion homeostasis. However, a direct relationship between changes in intracellular ion concentrations and cytotoxicity was not established for artificial ion transporters until 2014. In 2014, the collaborative research team discovered that calix [4]pyrrole-based ion transporters promoted cancer cell death by inducing apoptosis. In the cells, synthetic transporters increased sodium chloride influx, which led to the production of reactive oxygen species and the release of cytochrome c from mitochondria. This eventually induced apoptosis via caspase activation (Nature Chemistry, 2014, 6, 885). 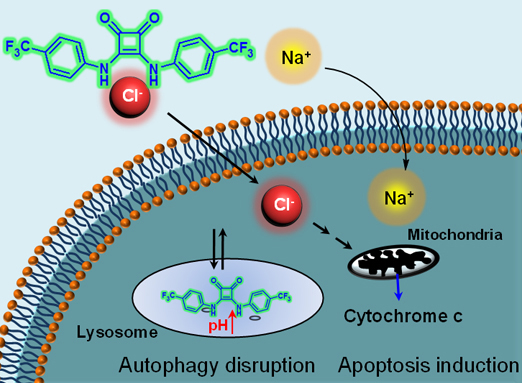 Studies revealed that the squaramide-based ion transporter led to increases in intracellular sodium and chloride concentrations, eventually inducing apoptosis just like calix[4]pyrrole-based ion transporters. On the other hand, the transport activity of squaramides disrupted autophagic flux by blocking fusion of lysosomes with autophagosomes, making them unable to form autolysosomes. In the treated cells, squaramides mediated the transport of chloride ions from the lysosomes to the cytosol where the chloride concentration is lower. In parallel, lysosomal protons escaped the lysosomes; this proton exit increased lysosomal pH, leading to the disruption of lysosomal function. Therefore, autolysosomes were not generated, disrupting autophagic flux in treated cells. This was unlike the calix[4]pyrrole-based ion transporters, which do not affect autophagy.