Dependence on Search Engines May Cause Business Failure

Internet portals (i.e., search engines) play a significant role in leading potential customers to access for-profit online companies. However, this dependence on portals places a burden on deficient firms, especially when the dependency is asymmetric.

The researchers use Nielson KoreanClick data (which collects tracking information of approximately 5,000 internet users) to demonstrate that overdependence on one portal poses significant business risk to online companies.

Portals are beneficial for a website, but firms need to be wary of dependence
While portals are beneficial to internet-based firms, asymmetric dependence on one portal increases failure rates due to the power imbalance between firms and portals. Online businesses must be listed among the first five pages of search results, which are accessed by approximately 90% of potential customers, to outmaneuver competitors. Search engines use algorithms to establish the order of search results and a company listed outside the first five pages faces a higher risk of business failure.

The asymmetric and dominant position of portals is only weakened when a well-known brand is absent from the first few pages, causing portals to lose credibility. This visibility spillover effect from market leaders may have a further negative impact on comparatively unknown internet-based firms.

While past research made significant contributions in understanding competitive interdependence among firms, there was room for improvement in examining competitive interdependence at the firm level with asymmetric dependence. Lee, Mun, and Park measure asymmetric resource dependence between internet-based firms and portals based on web traffic. Firm vulnerability is more significant when portals can avoid sales-channel specific investments. Moreover, portals face significantly lower costs in terminating relationships.

This study uses data from the Korean search engines Naver and Daum, which represent around 95% of the country’s online search queries; Google has a comparatively small market presence. The authors consulted the Nielson KoreanClick database and used data from April 2002 to August 2011. This data was collected from Korean internet users’ monthly web traffic data from the leading 96 firms in four categories (blog or social network service, music, open market, and video sharing).

Relying on one portal has consequences
Lee, Mun, and Park advance the existing measure of asymmetric dependence that was previously used to study the impact of buyer–supplier relationships on the survival of suppliers. 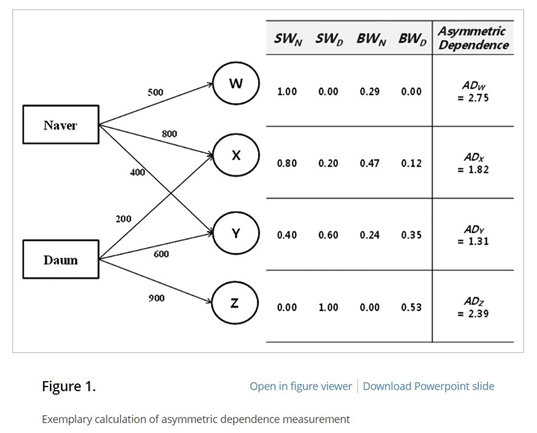 SWNi represents the traffic weight of an online firm i on the Naver portal. An increase in SWNi is accompanied by a decrease in the firm’s bargaining power, implying that the firm’s dependence on portals is high. For example, if a firm depends on only one portal, then the numerator has 1 as its maximum value, while it becomes 0.5 if a firm has the same number of transactions from two portals.

BWNi represents the traffic weight of firm i’s traffic flow from Naver. If a firm has web traffic only with a single portal that has two equal referrals with two firms, then the bargaining factor is 0.5 and the value of asymmetric dependence is 2. The figure above shows that W and Z are satellite internet firms that depend on one portal, whereas X and Y distribute the entry points from both Daum and Naver. Results show that ADw (2.75) and ADz (2.39) have a higher asymmetric dependence than ADx (1.82) and ADy (1.31).

Conclusion
Lee, Mun, and Park develop a new tool to measure resource dependence at the firm level. They recommend that firms balance their dependence on online portals but recognize that consumers rarely use multiple portals. This study presents a clear view of the burden imposed on online businesses as result of their dependence on search engines, and online businesses could benefit by formulating business strategies based on the results of this study.

Overall, this is an engaging exploration into the potentially negative consequences faced by relatively weaker firms because of their asymmetric dependence on external organizations.