Over the past decade, South Korea has maintained the highest suicide rate among the 35 nations of the Organization for Economic Cooperation and Development (OECD). It is clear, then, that suicide-prevention strategies need to be adopted at the national level. But which measures are most effective?

In a paper titled “Does a TV Public Service Advertisement Campaign for Suicide Prevention Really Work? A Case from South Korea,” Yonsei University researchers Song, You, Kim, Kim, Kwon et al. (2016) examine whether a TV advertisement significantly increased the volume of calls to a crisis hotline. The paper was published in Crisis: The Journal of Crisis Intervention and Suicide Prevention.

Using a database of phone calls to a crisis hotline compiled by the Korean Ministry of Health and Welfare, the authors compared daily call counts before, during, and after the TV PSA campaign. The campaign aired for 16 days in 2013, and the researchers investigated changes in the number of calls related to both suicide and other general mental health issues.

Previous studies have shown the effectiveness of PSA campaigns for reducing smoking and alcohol abuse. However, such campaigns aimed at suicide prevention are a relatively recent phenomenon, and therefore research on their effectiveness is limited. Moreover, despite South Korea’s high suicide rate, few studies have specifically investigated the impact of suicide-prevention PSAs in the Korean context.

Song, You, Kim, Kim, Kwon et al. analyzed the call volume at the “129 Health and Welfare Call Center” (operated by the Ministry of Health and Welfare) during the 16 days before the PSA campaign began, the 16 days while the campaign ran, and the 16 days after it had concluded. The call data were divided into two categories: suicide-related counseling and other mental health issues. For the purposes of comparison, the researchers also analyzed crisis-call data for the corresponding period (March to June) in 2012. Finally, they investigated whether the differences in call counts before, during, and after the campaign were statistically significant. 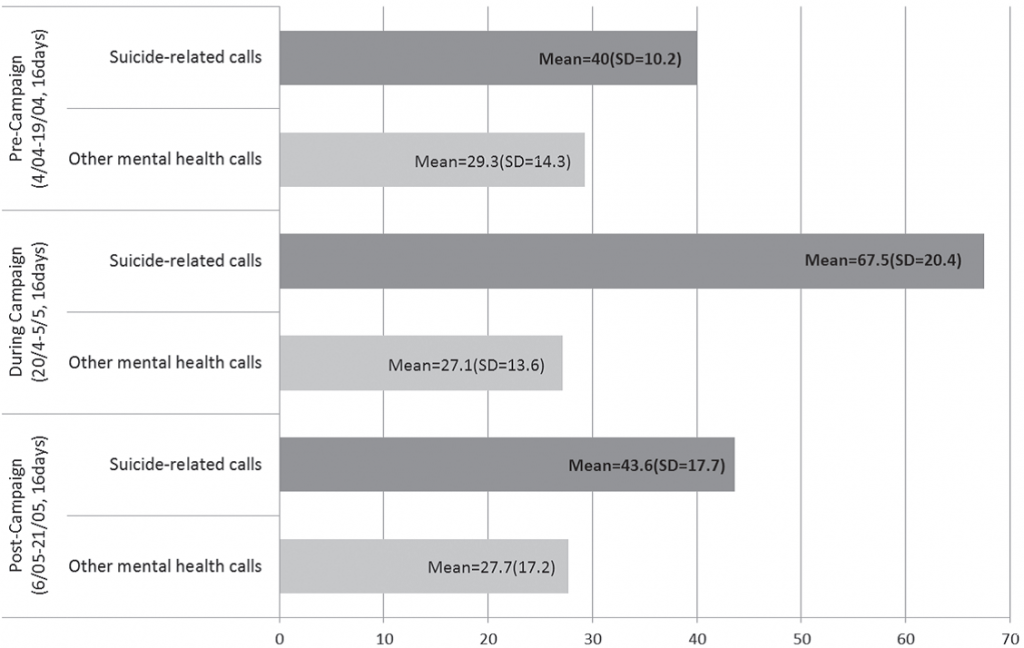 Importantly, there was no significant change in call volume for the corresponding period during the previous year (March to June 2012). This seems to clearly indicate that the surge in calls observed during the 2013 PSA campaign was not related to “seasonality”—that is, a spike in suicidal behavior during certain months or seasons.

Challenges remain
While calls to the hotline significantly increased during the PSA campaign, they quickly dropped to precampaign levels immediately after its conclusion. This highlights a need to find ways to encourage people to continue using crisis hotlines beyond the timeframes of suicide-prevention PSA campaigns. For one thing, the duration and frequency of advertisements could be extended to increase public exposure to the hotline number. The duration of the suicide-prevention campaign was actually quite short compared to other TV PSA campaigns in Korea, such as those targeting smoking (the suicide campaign also had a much smaller budget). Moreover, beyond TV campaigns, other media—such as newspapers, billboards, radio, and movie theaters—could be used to continue to draw public attention to the crisis hotline.

Looking forward
Given the paucity of research on the impact of TV PSA campaigns on suicide prevention in South Korea, this study makes an undeniable contribution to the literature. Further, it opens doors for future research to consider aspects such as the demographics of hotline callers, whether callers actually view TV PSA campaigns, and whether such campaigns actually reduce the number of suicide deaths (in Korea, detailed data on daily suicide deaths are not publicly available).

The researchers’ findings are consistent with those of previous studies (in other national contexts) reporting that TV PSA campaigns positively affect suicide-related calls to crisis hotlines. Likewise, other studies on PSA effectiveness have found similar reductions in call volume after the end of a campaign. While there is little doubt that such PSAs actually spur people to seek help, there is also a need to extend the effect beyond the scope of specific campaigns.

Overall, this study provides important insight into the effectiveness of specific strategies aimed at reducing suicide rates. Considering the high prevalence of suicide in South Korea, such research is vitally necessary in the Korean context, and the authors fill a noticeable gap in this area.

Figure. Comparison of call volumes related to suicide and other mental health issues at the 129 Health and Welfare Call Center during each phase of the TV PSA campaign (Unit: calls, daily average).