Making We the People

True to Yonsei’s long tradition of interdisciplinary research, a political scientist meets a constitutional scholar to write an internationally acclaimed book that explores the theories and histories of democratic constitution-making in postwar Korea and Japan.

What does it mean to say that it is “We the People” who “ordain and establish” a constitution? Who are those sovereign people, how can they do so, and by what right? Interweaving democratic theories with East Asian history, Sung Ho Kim of our Political Science Department and Chaihark Hahm of the Law School attempt to answer these perennial questions by revisiting the constitutional politics of Japan and Korea in a highly original and multidisciplinary book – Making We the People: Democratic Constitutional Founding in Postwar Japan and South Korea (Cambridge University Press, 2015).

A recipient of the Best Book Award of 2016, the highest academic honor at Yonsei, this book not only contains the first sustained historical investigation of the making of Korea’s “Founding Constitution” (1948), but also offers a completely fresh look at that of Japan’s “Peace Constitution” (1947). Through this political-theoretical and legal-historical investigation, further, this book problematizes the conventional theoretical assumptions regarding the status and nature of the sovereign people as agents of constituent power.

Rejecting the democratic dogma that “We the People” are bearers of a supra-legal and pre-political sovereign power, the authors suggest that the people are as much created by the constitution as they create it. That is to say, constitution- and people-making are mutually constitutive. For the authors, this alternative account more accurately captures the actual socio-legal process by which a constitution is made. Equally, if not more importantly, it provides a normatively more attractive reason for adhering to the constitution of one’s own making.

The book’s greatest strength lies in the fact that it adroitly reveals the unique texture of the Japanese and Korean constitutional founding experiences while simultaneously highlighting the universal nature of the problems inherent in the theories of constitution-making in general. 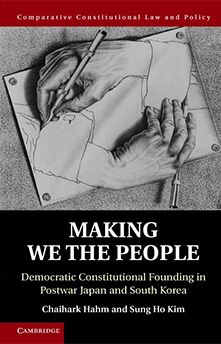 For its theoretical and historical contributions, this book has received much international accolades by leading scholars in the field of political science, constitutional law and East Asian history:

“Their extraordinary intellectual achievement provides rare illumination of the crucial and deeply misunderstood concept of popular sovereignty. Their learned, elegant, and searching analysis should be an enduring part of the conversation that must be conducted if we are to make sense of our common constitutional predicament.” [Gary J. Jacobsohn, H. Malcolm Macdonald Professor of Government, University of Texas, Austin]

“The simultaneous writing of constitutions in twentieth-century Japan and Korea, two countries under heavy American influence, makes an obvious candidate for comparative study yet no such work has been undertaken until now. In Making We the People, Hahm and Kim have dug deeply into both histories and their global context, offering a nuanced and thoughtful account.” [Andrew Gordon, Lee and Juliet Folger Fund Professor of History, Harvard University]

For those with further interest in this book, please see the publisher’s website for the book [http://www.cambridge.org/kr/academic/subjects/law/comparative-law/making-we-people-democratic-constitutional-founding-postwar-japan-and-south-korea?format=HB#164fv2DTLm1J7RRU.97].