It’s Madness: The Politics of Mental Health in Colonial Korea

A Yonsei researcher explores how the mental illness was conceptualized and socially dealt and how it interacted with traditional beliefs about madness in Korea during Japanese colonialism.

Mental illness remains one of the most elusive and neglected topics in Korean history. As in most Asian countries, severe social ostracism, shame, and fear of jeopardizing marriage prospects induce families to conceal the mentally ill behind closed doors. The tendency in contemporary Korean society to somatize symptoms as culture-bound maladies and association of disturbing behavior with spiritual and moral failings reveal resilient traditional views that have shaped the understanding of mental illness. It’s Madness! The Politics of Mental Health in Colonial Korea (UC Press, 2016), written by Professor Theodore Jun Yoo at Department of Korean Language and Literature, Yonsei University, examines the critical years under Japanese colonialism (1910-1945) when a new “rhetoric of care” emerged as mental health became defined as a medical and social problem.

This project grew out of his first book, The Politics of Gender in Colonial Korea: Education, Labor, and Health, 1910-1945 (UC Press, 2008), in which Professor Yoo examined Korean women under Japanese colonial rule and how their roles radically shifted from traditional domesticity to new positions in schools, factories, hospitals, and other settings. At the core of this book was the interplay between Korean women and the intrusive colonial apparatus that sought to impose a certain kind of modernity on their ideas, relationships, social behavior, and bodies. Professor Yoo showed that while some women thought of Japanese policy as tantamount to progress, others resisted by distinguishing between the often conflicting messages of modernity and colonial control.

The idea for his new book was inspired in large part by an incident that took place in February 2008, when an arsonist set ablaze the Namdaemun, a six-hundred-year-old gate and National Treasure No. 1 in Seoul. Public reactions ranged from sadness to anger; some even compared the incident to the infamous 9/11 attacks on the United States. Official reports suggested the arsonist suffered from hwabyeong (fire illness, 火病), which had reached its boiling point after the government refused to respond to his complaints over a land dispute. Rather than to investigate his mental state, the media focused primarily on the social factors that lead to his “misguided eruption.” To be sure, a small dissenting minority urged fellow Koreans to consider mental illness as the cause of this tragedy and other social ills; on the whole, however, the public expressed little sympathy and treated the arsonist’s alleged hwabyeong with shame and disgust. Within days, the public discourse shifted to a national debate about how to preserve cultural heritage sites. 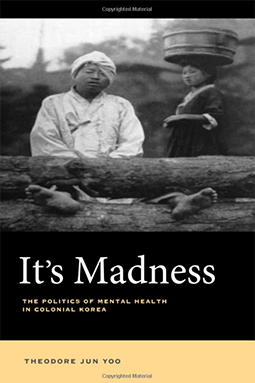 To understand why modern (Western and medical) conceptualizations of mental illness have failed to supplant indigenous beliefs and practices, this study addresses several important questions. First, what were the traditional beliefs about madness? How did Koreans employ folk maladies in premodern Korea such as hwabyeong (fire illness), gwanggi (crazy, 狂氣), and han (pented up emotions, 恨) to explain inappropriate or dangerous behaviors? The first chapter examines the impact of Chinese traditional medicine and its holistic approach to treating mental disorders as well as the resilient history of folk illness and its explanations for inappropriate and dangerous behaviors. It argues that persistent tendency in Korean society to somatize symptoms as culture-bound maladies and explain disturbing behavior as spiritual and moral failings reflected the resilience of traditional understanding of mental illness.

The second question pertains to the social pathology of mental disorders under Japanese colonial rule—that is, how did madness become an object of medical discourse and a privileged site for constructing normality? The second chapter addresses the emergence of clinical psychiatry as a discipline and the competing models of care under the Japanese colonial authorities and Western missionary doctors. In particular, it examines the transformation in the Japanese approach to patients who were treated first as subjects of care and later as objects of study. As the custodial aspirations diminished, medical staff focused on solely on diagnosis (with the adoption of Krapelinian nosology) and research with the creation of a university psychiatric clinic. It also examines how Christian missionaries sought to combine religion and medicine to treat mentally ill patients under their care, especially at the new Severance Hospital in Seoul. The development of three discursive sites (e.g., medicine, psychiatry, and criminology) and their corresponding institutions (e.g., hospital, asylum, and prison) provided the colonial state a means to normalize and control its subject.

The third question shifts the focus from medical discourses to interpretations of culture-bound emotional states that Koreans have viewed as specific to their interpersonal relationships, social experiences, and local contexts. The third chapter examines how Korean society attributed anomalous behaviors to emotional states gone awry: for instance, one’s lack of jeong (emotional attachment), pent-up han (resentment), or absence of nunchi (tact) that provoked excessive hwa (anger) or suchi (shame). Even as new medical language began to creep into cultural explanations, traditional idioms remained resilient. Thus, new categories began to emerge such as uul(depression) + jeung (syndrome). This phenomenon is illustrated in contemporary cultural productions such as literature, film, and performances during court hearings.

The final question focuses on the social pathology of medical discourse under Japanese colonial rule and how the Korean press adopted this language to reshape social understandings of mental illness. In contrast to earlier period, colonial authorities resorted to modern forms of surveillance (e.g., what Michel Foucault terms “bio-power”) as they sought to regulate public health. In part, they utilized (from folklorists to psychiatrists, demographers to medical doctors) to conduct studies about the life processes of the Korean people. For the first time, surveys and studies of Korean mental health, crime, genetic illnesses, and other topics proliferated in both the private and state sectors.

Chapter four examines a wide range of social and institutional discourses in the press featuring new nosological and gendered labels such as the hysteric and neurotic, as well as other types of social pathologies and abnormalities embedded in the field of psychiatry which emerged into the field of vision of public opinion. It also examines how the press addressed the social problem of suicide, especially the cultural, political-legal, medical and socio-economic reasons offered to explain why people killed themselves. More than the collation of raw numbers, urban interlocutors sought to explain how mental and emotional distress could be caused by physical and moral factors, challenging traditional interpretations, which insisted that suicide was a voluntary act. It explores gendered explanations and social stressors such as early marriage, male infidelity, financial losses, unrequited love, physical illness, and so forth, which was said to trigger suicidal tendencies in people. At the same time, the pathologization of deviant behaviors as neurological disorders, contributed to a broader discourse on suicide as a measure of social health, which placed people’s lies under increasing scrutiny.

The epilogue examines a sensational murder case in the 1930s to shed light on the intersection between scientific knowledge and the social imperatives of a colonized state that sought to control unruly elements of the population. It also highlights the impact of new psychiatric discourses on everyday social relations as well as the difficulties to supplant indigenous beliefs and practices.

The literature on the history of mental health in Korea is scant and constitutes a major lacunae in the historiography. Although several articles on mental disorders have been published in recent years by psychiatrists, they are more or less quantitative and do not adequately address the cultural and social aspects. Drawing upon unpublished archival as well as printed sources, this study examines the ways “madness” has been understood, classified, and treated in traditional Korea and the role of science in pathologizing and redefining mental illness under Japanese colonial rule.