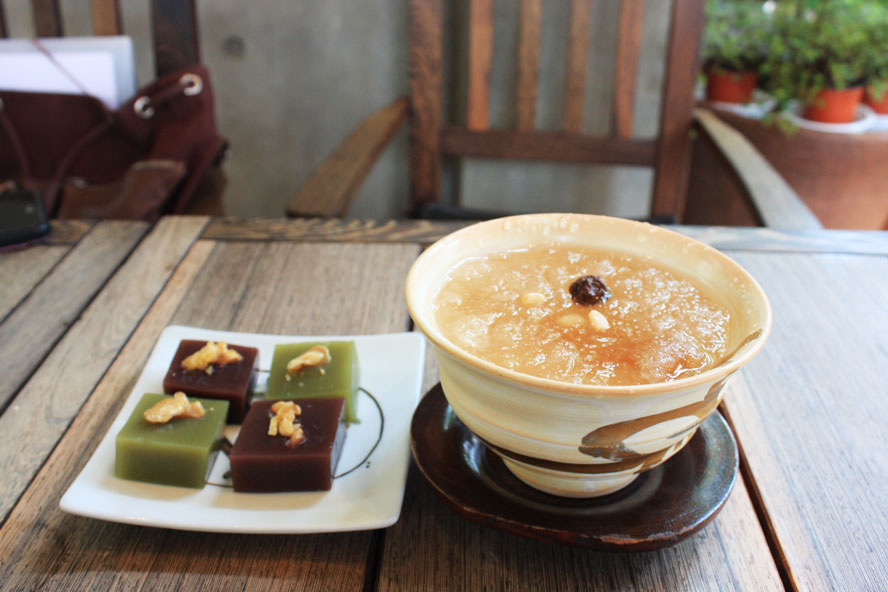 Sip your way into the world of traditional Korean tea

In the highly digitalized 21st century, being quick and efficient appears to be the virtue that people in contemporary society eagerly seek after - and Korea is no exception. However, those resentful of this “ppali-ppali*” culture is opting for “slow life,” approaching their everyday life in a relaxed manner.

One such example of slow life is reverting to Korea’s traditional tea-drinking culture instead of drinking takeout or instant beverages that many prefer nowadays. Indeed, slowly sipping tea at a traditional Korean tea house will surely help cultivate a tranquil mind and a healthier physique, and there are several cozy places located just minutes away from Yonsei University's main campus in Seoul, Korea.

Translated to Tea Drinking Garden, Cha Masineun Tteul is situated in Buk-chon, a traditional han-ok village in Seoul. The tea house has been a renowned tourist spot for its beautiful architecture and fine tea—it has been remodeled into a han-ok, the traditional Korean house style, to elegantly integrate elements of the past and modern of Seoul. At the center of the tea house lies a small garden that is visible through the glass panels surrounding it.

Cha Masineun Tteul presents a delightful traditional Korean tea drinking experience with its menus served in a fully set tea tray with a tea pitcher and teacups. Customers can experience the whole process of brewing traditional teas such as ssang-hwa tea, ginger tea, and chrysanthemum tea. The preparation requires three simple steps. First, boiled water is added into the pot filled with loose tea leaves. The leaves are steeped then drained into a tea snifter. The readied tea is then poured into a teacup. Though the process may seem cumbersome for first-timers, with some practice, one will realize that the process is quite relaxing and even therapeutic, as these systematic steps clear one’s mind from troublesome thoughts. Sipping tea amidst the quiet lull of peoples’ murmurs while taking in the aromatic scent is the perfect way to find tranquility in the concrete jungle of Seoul.

A large wooden door leads to Café Wednesday, a haven from the bustling, overcrowded streets of Insa-dong. The cool air-conditioned interior with the mixed scent of teas gently wafting in the air welcomes the customers’ heat-beaten bodies.

Cinnamon tea and jujube tea are the two most popular teas in the shop. To prepare a cup of cinnamon tea, the brewer has to boil the cinnamon sticks on a low fire for several hours until the spicy and tangy flavor is properly steeped into the tea. While preparing a cup of cinnamon tea seems quite time-consuming, it is less so than the preparation for jujube tea. The jujubes are boiled extensively in low fire for a total of eight times after which the brewer presses the jujubes to extract the juice. The tea is then strained to remove any remaining residues.

If tea alone does not satisfy your cravings for tradition, red bean jellies can be the perfect supplement. A common ingredient in classic Korean sweets, softly boiled red beans sweetened with saccharine is a favorite among fans of traditional Korean desserts. Café Wednesday’s top-quality menus are the result of patience, repetition, and effort— values considered crucial when it comes to traditional cuisine in Korea.

Secret Garden is another tea house in Insa-dong that captures the hearts of the people. The tea house is connected to an outdoor garden that contains a small pond and pine trees; the shop truly creates the aesthetics of a secret garden, right in the heart of Seoul. Secret Garden presents a quiet and soothing environment, with the piano melody in the background enriching the atmosphere. The prices of tea are a little pricier than regular drinks sold at franchise cafés, but the work devoted to the preparation of the teas fully justify the price.

Among the wide variety of traditional teas available at Secret Garden, o-mi-ja tea certainly stands out with its ruby-red coloration that resembles the blazing red sun. Secret Garden’s o-mi-ja tea is specially prepared by the owner, as he carefully steeps the dried berries in water overnight until the color turns bright red, an indication that the tea is ready for consumption. The term o-mi-ja, refers to “five flavors” in Korean due to its complex harmony of flavors - spicy, sour, sweet, bitter, and salty - in one single cup. To maintain the delicate balance of flavors, most of the complimentary snacks are neutral and light. With menus ranging from in-jeol-mi (traditional Korean rice cake coated with bean flour) to han-gua  (traditional Korean confections) Secret Garden provides customers with the most famous traditional snacks that complement their carefully prepared teas.

Tea houses have always served their roles as places of peace and rejuvenation. Unlike beverages from franchise cafés that serve fast and unified tastes, the unique charm of Korean traditional tea houses can be attributed to the element of personalization. Each brew possesses a flavor distinguished from others, drawing people into the art of tea drinking. Tea houses may not be frequently seen in the streets of Gangnam, but their existence allows people to take refuge from the stressful urban life. If you are looking for a quick runaway to the world of tradition and tranquility, traditional tea houses are here for you.